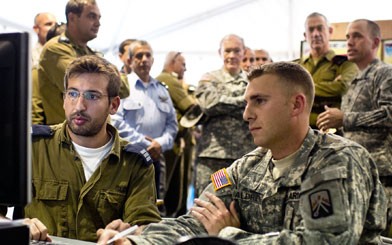 On November 7th, East Brunswick Jewish Center (EBJC) commemorated Veterans Day early with their annual “Veterans Shabbat,” inviting congregants and Jewish community members who are veterans of the U.S. Armed Forces or the IDF to take part in a program honoring their service.

Dan Rozett, Federation’s Manager of Community and Israel engagement, participated as an American-Israeli veteran of the IDF. Dan and other veterans took questions from members of the EBJC-USY chapter, about their military service.

“It was a great opportunity to present my military experience in a positive way to the teens, as well as help them understand the nobility in serving one’s country,” said Rozett.  “I particularly was happy to answer a question about how my military experience affected my life and my perspective on life, explaining that despite some unfortunate take-aways, such as PTSD and survivor’s remorse, the military teaches responsibility, duty, and loyalty -- qualities that help one overcome challenges -- in addition to appreciation for the good in life.”

Veterans of both armies naturally form tight bonds with each other, serving countries that have similar values, such as democracy and freedom, and in many cases, have common enemies, resulting in high-level military cooperation unlike any other.

This bond is even stronger when the IDF veterans are American-Israeli, and more so when the US veterans are Jewish and being able to relate to one another’s culture and upbringing.

Jewish Federation thanks our partner, EBJC, for honoring this bond and taking time to show appreciation for the veterans of the United States and the State of Israel.

Please thank a veteran for their service!

DID YOU KNOW THE ORGANIZATION, JEWISH WAR VETERANS, IS A JEWISH VOICE FOR VETERANS AND A VETERANS' VOICE FOR JEWS? THERE ARE CHAPTERS THROUGHOUT THE STATE OF NJ, AND ACROSS THE COUTNRY. LEARN MORE