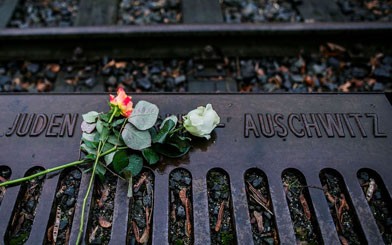 Today we are humbled to commemorate the day with action to not only honor those who perished and suffered, and continue to suffer today, from the atrocities - but also to push back on hate, stem the current rise in anti-Semitism, and ensure the promise of NEVER AGAIN.

On this annual day of commemoration, the United Nations urges every member state to honor the six million Jewish victims of the Holocaust and millions of other victims of Nazism and to develop educational programs to help prevent future genocides.

Jewish Federation in the Heart of New Jersey joins World Jewish Congress in asking you to help Make Sure American Schools Teach the Holocaust. Join World Jewish Congress and 90,563 supporters in signing a petition calling on the United States Congress to make sure Holocaust education is taught in American schools by signing into law The Never Again Education Act H.R. 943.

The Never Again Education Act H.R. 943 would create a new grant program, within the U.S. Department of Education to provide teachers across the country the relevant resources, tools and training to teach school children about the Holocaust and the repercussions that hate and intolerance can have on our society.

How are you marking International Holocaust Remembrance Day, promoting Holocaust education, empowering yourself to push back on hate? Consider, also:

Get involved in today’s fight against ani-Semitism. Learn more about the heart of NJ’s Jewish Community Relations Commission (JCRC).

THE FOLLOWING WAS PUBLISHED BY JEWISH FEDERATION IN THE HEART OF NEW JERSEY'S PARENT ORGANIZATION: JEWISH FEDERATIONS OF NORTH AMERICA
ON THIS DAY
THE 75th ANNIVERSARY
OF THE LIBERATION OF AUSCHWITZ,
WE REMEMBER.
WE EMPOWER HOLOCAUST SURVIVORS
Survivors of the Auschwitz concentration camp will return to the site in Poland where so many perished. They will travel across the globe with their caregivers, wheelchairs and walkers in the still of winter, and they will take a difficult dive into their past to remember both the horror of their own experiences and the 6 million souls that were lost. However, this time, they will not be there as simply victims. Read this op-ed by JFNA's Chair of the Board of Trustees Mark Wilf and President & CEO Eric D. Fingerhut.
WE SHARE THEIR STORIES
Meet some of the survivors who, through Federation, are connecting to vital health services and the warmth of community.
WE SUPPORT THEM AS THEY AGE
Learn more about services for vulnerable Holocaust survivors.
WE INVITE YOU TO JOIN THE COMMEMORATION
View the ceremony, which took place this morning from the gates of Auschwitz, with dozens of heads of state and over 100 Holocaust survivors from around the world.