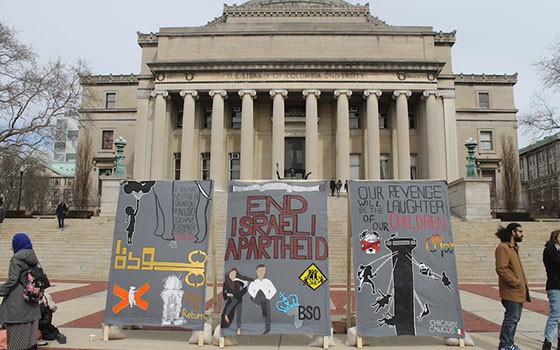 As our children return to school, many on college campuses, Seffi Kogen, the American Jewish Committee’s assistant director for campus affairs, offers these thoughts about on-campus anti-Semitism and the University of Chicago’s recent statement on trigger warnings and safe spaces.

NEW YORK (JTA) — They’re all true, all those stories you’ve heard. The Jewish student questioned about whether her Judaism and involvement in the Jewish community would disqualify her from serving in student government. The Israel bashers who besieged a movie night put on by a pro-Israel group, forcing Jewish students to escape under police protection. The man from Students for Justice in Palestine who stood up at a rally of campus rape survivors and their allies and used his time at the microphone to attack Israel.

It’s all true. And it’s become so bad that some suggest that first-year students be warned to “brace yourselves for insane anti-Semitism.”

Respectfully, I beg to differ.

In fact, there has never been a better time to be a Jewish college student. That is fact, not opinion.

Jews were not fully accepted into American higher education until the 1950s, when the quota system finally came to an end. In the 1960s and ’70s, civil rights and anti-war activism often led to contentious relations between Jewish students and campus administrations. And how could anyone argue that life was better for young Jews before the turn-of-the-century advent of Birthright?

No, there’s no disputing that recent years — with Hillel active at over 500 colleges and universities, Birthright bringing 40,000 people to Israel each year and hundreds of millions of dollars pouring in to support Jewish life on campus — have afforded Jewish students across the country a set of opportunities never before imagined.

And yet: the swastikas. The suspicions of Jewish dual loyalty that we had all thought long buried. And the hatred directed at Jewish students (but only, we’re assured unreassuringly, because they are Zionists, as if it were possible to cleave Zionism from Jewish identity).

Facing different but not entirely dissimilar challenges, many other oppressed and marginalized groups have called for trigger warnings, altered curricula and “safe spaces” to congregate and convalesce. This is certainly understandable. We want college students to feel secure as they enter this pivotal time in their lives.

Yet no matter how nobly intentioned, these measures do more harm than good. Jews spent decades demanding entrée into the academy, and academic freedom and the marketplace of ideas have allowed Jews to thrive on the American college campus. We as a community would be poorly served by efforts to diminish those values.

The University of Chicago made headlines recently for sending its incoming students a note that read, in part: “Our commitment to academic freedom means that we do not support so called ‘trigger warnings,’ we do not cancel invited speakers because their topics might prove controversial, and we do not condone the creation of intellectual ‘safe spaces’ where individuals can retreat from ideas and perspectives at odds with their own.”

The university is right. As Supreme Court Justice Louis Brandeis wrote so many years ago, “Fear of serious injury cannot alone justify suppression of free speech. Men feared witches and burnt women. It is the function of speech to free men from the bondage of irrational fears.”

Anti-Zionism is a liberal orthodoxy very much in vogue in progressive activist circles today. It is commonplace to find anti-Zionism enforced in groups concerned with LGBT rights, sexual assault prevention, climate justice and more. But anti-Zionism is deeply offensive to the majority of Jewish students who are moved as Jews to support the Jewish state — if for no other reason than because half the world’s Jews live there.

Yet students need not be sheltered from anti-Zionist opinions. We have nothing to fear from them. We must have confidence that the arguments for Zionism are compelling enough to survive — even thrive — under intellectual scrutiny.

So, entering college freshmen and returning students, don’t “brace yourself for insane anti-Semitism.” Prepare yourself, instead, to encounter ideas at odds with your own. Don’t simply accept those ideas. Examine them carefully and critically before determining whether they are worth incorporating into your worldview.

And while you shouldn’t be overly concerned about “insane anti-Semitism,” you should take care to look after your own Judaism. Get involved in Hillel. Enroll in a Jewish studies course. Educate yourself about modern Israel. The best defense of the Jewish state is not ratcheting up the rhetoric, it’s seeking out a strong Jewish community, enhancing your knowledge and identity, going on a Birthright trip.

Experiencing the marketplace of ideas at a university is a great privilege. Don’t waste it.