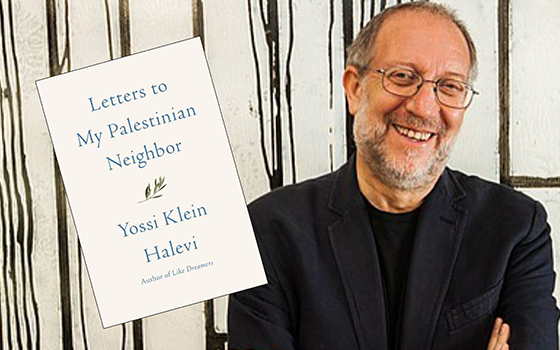 During a bout of insomnia, Yossi Klein Halevi found himself looking out his window in the French Hill neighborhood of Jerusalem, thinking about what he would say to his Palestinian neighbor. That sleepless night, the idea for “Letters to My Palestinian Neighbor” was born, Halevi recalled during a book launch event May 23 at Rutgers Hillel, New Brunswick. He wanted to explain the Jewish narrative to The Palestinians – since he felt there has been virtually no attempt to explain the Jewish story and perspective directly to them. The book, which has also been published in Arabic and is available for free as a download on the web, explores the dynamics underlying the ages-old Israeli-Palestinian conflict, as well as the perceptions – and misperceptions – many have about the current conflict. In a series of letters, the author describes how the conflict appears through his Israeli eyes.

There was another important audience he considered: the young American Jewish audience, saying one of his goals was to explain who is Israel is and why it matters to the next generation of Jews –  many who have no direct knowledge of Israel’s history or its place in their own Jewish story.

The author described his understanding of Israel’s story during a conversation facilitated by Gary Rosenblatt, editor and publisher of the New York Jewish Week and New Jersey Jewish News. To paraphrase excerpts:

With so much talk today about the West Bank and the territories, that’s not how I see things. I see the land as Judaea and Samaria, the ancient Jewish homeland, with roots going back to the Bible and beyond…

So much of recent commentary ties modern Israel’s creation to the Holocaust, but it is misleading. The Holocaust is not Israel’s primary reason for being. In fact, most Israelis trace their roots to Arab lands where they lived for generations before being forced to leave.

Peace is possible only when both sides realize they are compromising on something they think they are entitled to and have a full claim to... There are Palestinians who have not been fully prepared to do that just as some Israelis have not.

In America, Jews participate in a relatively welcoming society with openness, flexibility, and respect for the other. In Israel, where many neighboring nations openly seek to do harm, Jews have needed to protect themselves by being the toughest kid on the block. Israel’s problem in this context is that the tactics they need to use to keep Israeli citizens safe undermine support for Israel among many in the West – even in the Jewish community.

Halevi lamented generations of Jews and Palestinians growing up uninformed or misinformed, making it difficult to have a constructive dialogue and fueling “split-screen” disconnects as with the recent U.S. Embassy opening in Jerusalem and the violence along the Gaza border. For most Israelis, the embassy move was a righting of an historic wrong. For Palestinians and many Americans – Jews and non-Jews – the focus was on those being killed or injured in the border conflict.

Complicating matters, he explained, neither American nor Israeli Jews are the same people they were when the State of Israel came into being. Widening gaps in their respective frames of reference have resulted in recent splits between Prime Minister Benjamin Netanyahu and the majority of American Jews on key issues such as the Iran deal – the majority of Israelis seeing it as a bad deal and Iran as an existential threat to the State of Israel.

Halevi said the disconnects are traceable and understandable – and because they are understandable, they are manageable – stressing we need a new way, a better way, of talking to each other about them.

“Letters to My Palestinian Neighbor” explores the depths and dynamics of the disconnects and then lays out a framework to recast and restart a better conversation.

The Jewish Federation in the Heart of New Jersey co-sponsored Halevi’s book launch event with New Jersey Jewish News as part of the Federation’s Israel@70 year-long celebration; to build on interfaith awareness that Israel’s complicated reality is too often oversimplified – and as a result, Israel vilified – in the media; and as part of its ongoing efforts to enable Jews from Monmouth and Greater Middlesex Counties to discover what Israel means to them. The fact that the event coincided with the recent violence at the Gaza border made the event particularly timely for the audience of nearly 150 attendees.

Yossi Klein Halevy is a noted scholar and author on the topic of the Israeli-Palestinian conflict, and respected leader of interfaith clergy peace initiatives in Israel. He is senior fellow on Jewish-Muslim relations at the Shalom Hartman Institute and co-director of the Muslim Leadership initiative.

Haroon Moghul, a Pakistani-American academic and commentator on Islam and public affairs, and author of “How to Be a Muslim: An American Story,” said: “Halevi’s book is a gift and a challenge…animated by this simple gesture: I will share my convictions because I wish for you to share yours. Then and only then can we find a durable peace...”

Cokie Roberts, journalist and New York Times bestselling author of “Capital Dames,” said, “Letters to My Palestinian Neighbor” offers a model not only for Middle East peacemaking but for navigating divides in our own country.”

The Jewish Federation in the Heart of New Jersey is the non-profit organization that convenes partners from the public and private sectors in the Jewish, interfaith, and civic arenas, as well as private donors, to strengthen the wellbeing and future of all Jews. The Federation cares for the vulnerable, connects people to communal resources, responds in times of crisis, and cultivates a spirit of collective responsibility within the Jewish community. Central to its mission is building bridges between the local community and Israel.