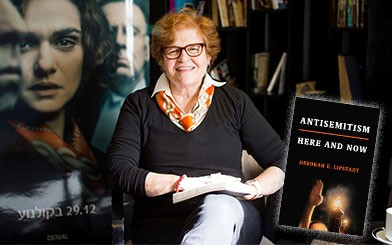 The award-winning author of Denial: Holocaust History on Trial, which became the basis for the film, DENIAL, starring Rachel Weisz, will speak at Rutgers University March 31, 2019 at 5:00 PM.
Deborah Lipstadt will discuss the topic of Antisemitism Here and Now, which is also the title of her new book recently released by Penguin Random House. Lipstadt will present a penetrating look at the rise of antisemitism at home and abroad in the past ten years, and speak to how we can, and must, address it.
“Rutgers is an incredibly diverse place, and we need to work hard to protect our culture of respect and inclusion. Antisemitism, discrimination, and racism have no place here,” said Jenny Mandelbaum, Professor of Communication and co-chair of the J-FAS (Jewish Faculty, Administration, and Staff) group. Added Rebecca Cypess, Associate Professor of Music and co-chair of J-FAS, “We are proud that the university is leading the way in highlighting this timely and critical issue.”
Lipstadt’s talk will take place at Rutgers Hillel, 70 College Avenue, New Brunswick, NJ. Doors open at 4:15PM. A book signing follows the event, which is sponsored by Rutgers J-FAS with support from Rutgers University through the President's Initiative on Diversity and Inclusion, and additional support from the Hann Foundation, Harriet and George Blank, Rutgers Hillel and the Jewish Federation in the Heart of New Jersey.
Admission is free, but registration is required. To register click here or go to jewishheartnj.org/lipstadt. Free parking is available, but parking registration is also required.

More about Deborah E. Lipstadt:
Dr. Deborah E. Lipstadt, Dorot professor of Holocaust Studies at Emory University in Atlanta, has published and taught about the Holocaust for close to 40 years.  The author of six books and numerous articles, she is probably most widely known because of the libel lawsuit brought against her (1996) by David Irving for having called him a Holocaust denier.  Irving then was then arguably the world’s leading denier.
After a ten-week trial in London (2000), in an overwhelming victory for Professor Lipstadt, the judge found Irving to be a “neo-Nazi polemicist” who “perverts” history and engages in “racist” and “anti-Semitic” discourse. The Daily Telegraph (London) described the trial as having "done for the new century what the Nuremberg tribunals or the Eichmann trial did for earlier generations."  The Times (London) described it as "history has had its day in court and scored a crushing victory." According to the New York Times, the trial "put an end to the pretense that Mr. Irving is anything but a self-promoting apologist for Hitler."
Her TED talk about the trial has received close to 1.2 million views.  The movie DENIAL, starring Rachel Weisz and Tom Wilkenson with a screenplay by David Hare, tells the story of this legal battle.  It is based on her book HISTORY ON TRIAL: MY DAY IN COURT WITH A HOLOCAUST DENIER (Harper Collins 2006) and recently reissued as DENIAL (Harper Collins 2016). The film was nominated for a BAFTA as one of the best British films of the year.
Professor Lipstadt’s book, ANTISEMITISM: HERE AND NOW, was published in January, 2019. In addition to an American edition, the book will be published in the UK, Germany, Czech Republic, and Israel.
She has written most recently HOLOCAUST: AN AMERICAN UNDERSTANDING (Rutgers, 2016) which explores how America has understood and interpreted the Holocaust since 1945.
Her book, THE EICHMANN TRIAL, (Schocken/Nextbook 2011) was described by the New York Times Book Review as having “done a great service by… recovering the event as a gripping legal drama, as well as a hinge moment in Israel’s history and in the world’s delayed awakening to the magnitude of the Holocaust.”
She has also published BEYOND BELIEF: THE AMERICAN PRESS AND THE COMING OF THE HOLOCAUST (Free Press, 1986) which surveys what the American press wrote about the persecution of the Jews in the years 1933-1945.  She is currently writing a book, The Antisemitic Delusion: Letters to a Concerned Student which will be published in 2018.
At Emory she directs the website known as HDOT [Holocaust Denial on Trial/ www.hdot.org ] which contains a complete archive of the proceedings of Irving v. Penguin UK and Deborah Lipstadt.  It also provides answers to frequent claims made by deniers.   At Emory Lipstadt has won the Emery Williams Teaching Award.  She was selected for the award by alumni as the teacher who had most influenced them.
Professor Lipstadt was an historical consultant to the United States Holocaust Memorial Museum and helped design the section of the Museum dedicated to the American Response to the Holocaust.
She has held Presidential appointment to the United States Holocaust Memorial Council (from Presidents Clinton and Obama) and was asked by President George W. Bush to represent the White House at the 60th anniversary of the liberation of Auschwitz.  She was part of a committee that advised Secretary of State Madeline Albright on matters of religious freedom abroad.
She has a B.A. from the City College of New York and an M.A. and Ph.D. from Brandeis University.