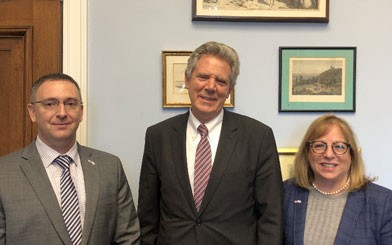 Jewish Federation in the Heart of New Jersey kicked off community relations in 2020 by participating in a mission to Washington, D.C., together with representatives of Jewish Federations throughout New Jersey, to advocate for the Jewish community’s needs pertaining to growing anti-Semitism and security concerns, among others.
Lay leaders and Federation professionals representing Monmouth and Greater Middlesex counties included board members, Amy Mallet of Tinton Falls and Liran Kapoano of East Brunswick, as well as Federation’s Manager of Community & Israel Engagement, Dan Rozett, who spearheads the local Federation’s Jewish Community Relations Council (JCRC) with Mallet, Kapoano, Rabbi Marc Kline of Monmouth Reform Temple, and Joel Krinsky of Manalapan.
They met with Rep. Frank Pallone; Rep. Chris Smith; and James Gee, Chief of Staff for Rep. Bonnie Watson Coleman, respectively, and in group sessions that included Senator Bob Menendez; Tricia Russell, Chief of Staff for Senator Cory Booker; and members of Congress representing districts neighboring Monmouth and Middlesex counties – along with lay and professional leaders from Jewish Federations of Greater MetroWest; Northern NJ; Southern NJ; and Somerset, Hunterdon and Warren Counties. 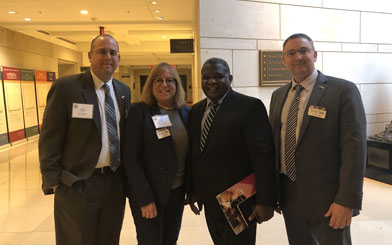 Federation representatives told government leaders what Jewish communal institutions, such as synagogues, day schools, JCCs and social service agencies report about the challenges of conducting business in a climate of increasing hate speech and assaults against Jewish people. In short: Jews are feeling unsafe and scared; they worry when and from where the next attack will come.
“We have elected officials who care and whose job it is to help us get through this,” said Liran Kapoano. “I encourage friends, neighbors, and community members to express yourself to our leaders in Washington, Trenton, and in Monmouth and Greater Middlesex counties. Jewish Federation and our JCRC can help.”
Jewish Federation in the Heart of NJ briefed elected officials and key staff members on proactive steps Federation is taking in bias education and security enhancements, and asked them for additional support in crucial areas:

1. For the existing Nonprofit Security Grants Program (NSGP), Representatives were asked to:

Support a proposal by Senators Cory Booker, Bob Menendez, and others to increase funding from $90 million in FY2020 to $360 million in FY 2021. The NSGP provides grants of up to $100,000 each to nonprofit institutions at risk of terrorist attacks, so they may improve building security.

2. For a bill now proposed to establish a Federal Never Again Education Act, lawmakers were asked to support the bill and increase funding from levels currently proposed.

This Act would authorize the U.S. Secretary of Education to award grants to eligible entities, and give teachers resources and training, to carry out primary and secondary school programs about the Holocaust and the consequences of hate and intolerance.
3. Categorize hate crimes as domestic terrorism, therefore making available addition Federal resources used to combat foreign terror attacks.
4. Regarding educational programs stemming from NJ’s Holocaust Education Commission, Federation asked members of Congress for help to secure more funding, oversee implementation, develop a syllabus, and restructure allocations enabling schools to receive funds directly.
Currently, NJ mandates Holocaust and genocide education through the NJ Holocaust Education Commission. After expenses, the Commission operates on a budget of $59,000, with no funding allocated to school districts.
“Meeting in Washington helped us convey the urgency of the Jewish community’s concerns. We have excellent relationships with our elected officials and other leaders to help in bringing these concerns to light,” said Amy Mallet. “Our advocacy regarding education to stem bigotry and hatred along with needs for security cross over many different religious and ethnic groups in our community. I am optimistic that the many discussions we had over the two days will result in continuing to build on the important groundwork.”
In a presentation by Elan Carr, the U.S. Special Envoy for Monitoring and Combating Anti-Semitism confirmed hate groups are “using the Internet to propagate the venom of antisemitism.” He laid out his office’s four-point plan to deal with the threat, including:
Following the productive exchanges that took place throughout the two-day Mission to Washington, D.C., Jewish Federation in the Heart of NJ’s JCRC is formalizing plans for follow-up with elected leaders, including continued conversations with them when they are here “in-district,” involving them in local programs, encouraging more community members to get involved in government and community relations, training more community members to advocate with civic leaders, and mirroring these types of efforts at the state level as well, according to Rozett.
“Jewish Federation in the Heart of New Jersey will continue to advocate for the safety and security of the Jewish community as well as the community at large,” said Susan Antman, Executive Director. “We thank our government leaders and all our partners from the private and public sectors, the many facets of the Jewish community, and every faith community for pushing back, standing together, and saying a resounding NO to hate.”
To learn more and get involved, go to jewishheartnj.org/jcrc.
Pictured top: (L to R) Dan Rozett, Rep. Frank Pallone, Amy Mallet
Pictured bottom: (L to R) Liran Kapoano; Amy Mallet; James Gee, Chief of Staff to Congresswoman Bonnie Watson Coleman; Dan Rozett