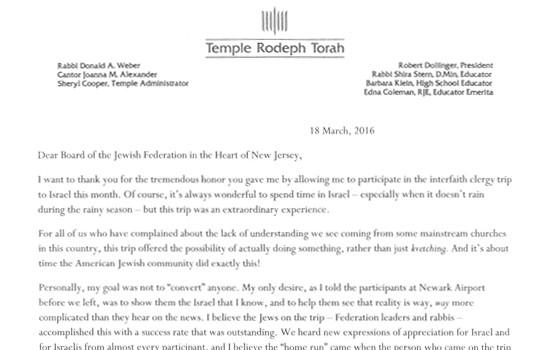 Dear Board of the Jewish Federation in the Heart of New Jersey,

I want to thank you for the tremendous honor you gave me by allowing me to participate in the interfaith clergy trip to Israel this month. Of course, it’s always wonderful to spend time in Israel – especially when it doesn’t rain during the rainy season – but the trip was an extraordinary experience.

For all of us who have complained about the lack of understanding we see coming from the mainstream churches in this country, this trip offered the possibility of actually doing something, rather than just kvetching. And it’s about time the American Jewish community did exactly this!

Personally, my goal was not to “convert” anyone. My only desire, as I told the participants at Newark Airport before left, was to show them the Israel that I know, and to help them see that reality is way, way more complicated than they hear on the news. I believe the Jews on the trip – Federation leaders and rabbis – accomplished this with a success rate that was outstanding. We heard new expressions of appreciation for Israel and for Israelis from almost every participants, and I believe the “home run” came when the person who came on the trip with the most anti-Israel bias walked up to the Immigration officer at Newark on our return. I heard the officer say, “Wow, a minister traveling in Israel…what’s it really like there?” And the minister responded, "Well, it’s complicated. And I’m glad I went.”

To those who made this experiment possible, thank you. Thank you from me personally, and thank you for having the vision to see how we make a real, concrete different in the conversation among different faiths here in the United States. I sincerely hope this was not a one-time event, because it was so valuable and so successful that it should be repeated as often as possible, across the country!

I am very proud to be associated with our Federation. I know you face challenges every day, but I hope you will take great satisfaction in what this trip accomplished.