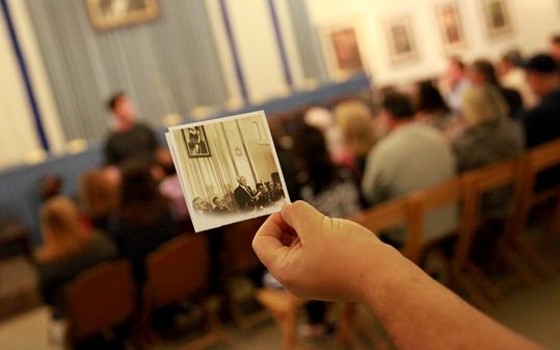 The Jewish Federation builds connections between Christian and Jewish clergy in a 10-day interfaith mission to Israel.

Among its many goals in the broader community, the Jewish Federation in the Heart of New Jersey aims to build a better understanding of the challenges faced in Israel and to dispel misconceptions spread in the news and social media.

In February, the Federation embarked on a unique journey to Israel, hosting 27 clergy, primarily from the Christian and Jewish communities of New Jersey, on a 10-day interfaith mission to Israel. The trip was the first of its kind.

Mission participants are currently planning a reunion to be held this summer. The purpose of the reunion is to review trip highlights and to discuss the impact of the mission on their spiritual and professional lives.

Throughout the Israel mission, the group visited holy sites sacred to both faiths, participated in each other’s prayer services, and met with Christian, Jewish, and Muslim leaders and activists. As they explored their own differences in faith, they visited programs devoted to coexistence, such as the Hand in Hand Center for Jewish-Arab Education in Israel, and the Roots Center in the West Bank, an initiative led by Palestinian and Israeli peace activists.

According to the Federation CEO Keith Krivitzky, the mission accomplished its goals of strengthening meaningful connections and understanding between the Christian and Jewish communities of New Jersey, and providing first-hand experiences to educate participants about Israel.

“Because of skewed coverage in the news and social media, doing a program like this is absolutely critical to presenting a more complex understanding of the reality of the Middle East,” Krivitzky said. “The long-term impact of engaging a diverse group of interfaith clergy and broadening their perspectives is incredible.”

Discussions are under way to conduct joint interfaith projects in the Heart of New Jersey communities represented in this mission, as well as future interfaith missions to Israel, he said. 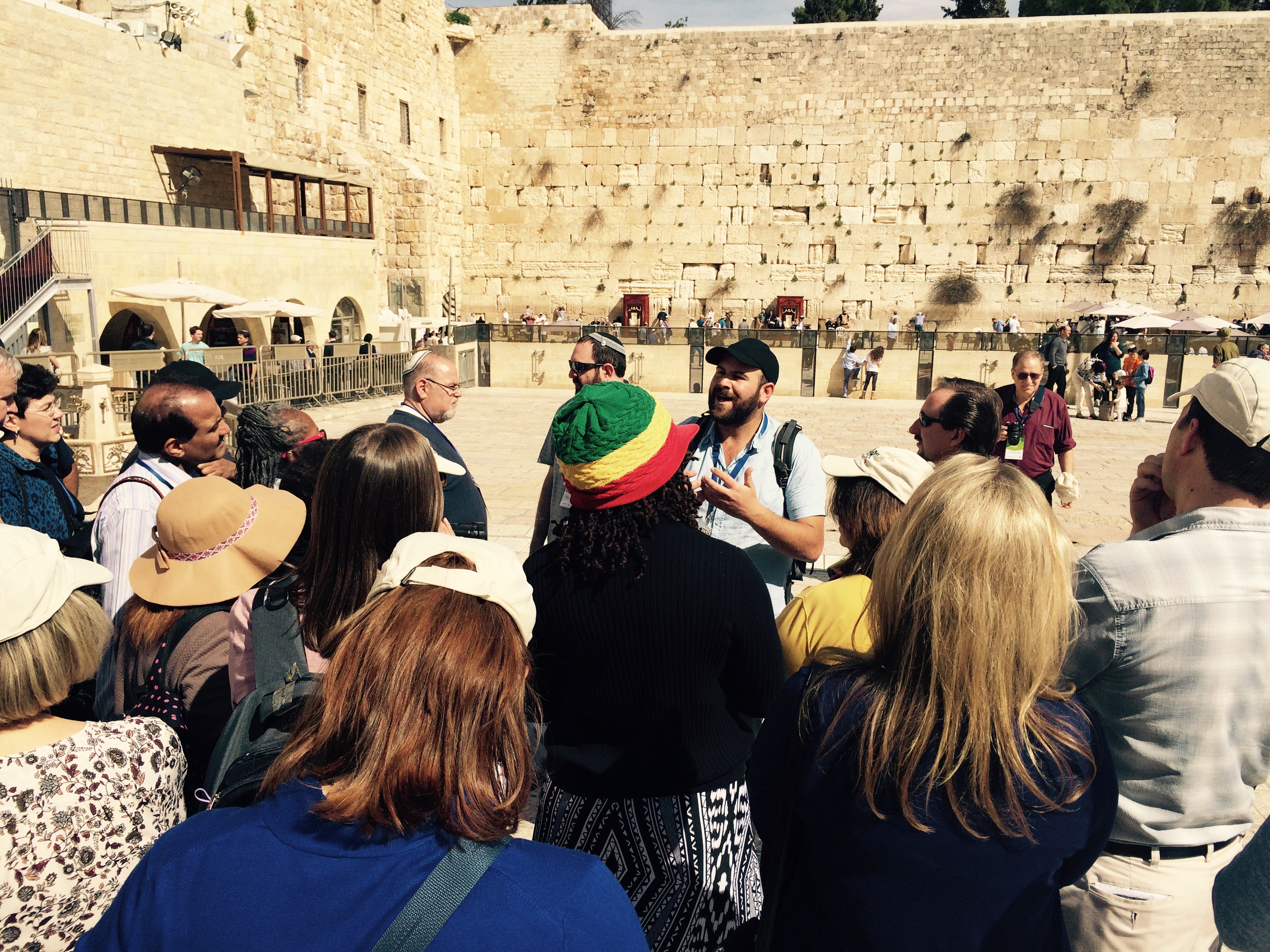 Clergy at the Western Wall in Jersualem.

The key take-away for one minister who participated in the mission was learning that the majority of the Jews and Arabs they met in Israel want to move forward in a peaceful way.

“We met people who could show us the real heartbreak and people who were reaching across divisions to work toward justice,” said the Rev. Stephanie Kaper-Dale of the Reformed Church in Highland Park. “The mission provided a direct connection to the complicated situation of Israel-Palestine, instead of trying to understand it from afar.”

On their first Friday night in Israel, mission members gathered at Robinson’s Arch at the Western Wall in Jerusalem for an egalitarian prayer service led by Rabbi Marc Kline of Monmouth Reform Temple in Tinton Falls.

“I did prayers about welcoming each other into our sacred space, and talked about some of the ruins around the arch that spoke from both a Jewish and Christian lens,” Kline said.

The response to the service, and to the mission in general, was uniformly gratifying and inspiring, said Kline. “We may have different faiths, but learning to grow respect for each other is huge. My advice to clergy regarding future interfaith missions to Israel: be first in line to sign up. Then prepare for an incredible journey of faith.”

When the group visited the Mount of Beatitudes on the Sea of Galilee, where Jesus is believed to have delivered his Sermon on the Mount, Kline said he was struck with emotion. “Although that site doesn’t hold value for me as a Jew, watching how much value it held for my Christian colleagues made me cry with joy,” he said. “I see my Judaism as requiring me to help people celebrate faith — not just my faith, but faith. God is God, and each of us has a different take, but that doesn’t change who God is.”

For the Rev. Hartmut Kramer-Mills, pastor of First Reformed Church in New Brunswick, who grew up in Germany, visiting Israel helped him put historic events in perspective. “Getting to know Israel is a must for any Christian clergy,” he said. “I share the concern we hear today about the reputation of Israel. There are not many Jews left in Mediterranean countries other than Israel. Currently there is an exodus from France. The world is not a very friendly place for people of the Jewish faith.

“Israel needs to exist in the world to provide that space,” said Kramer-Mills. 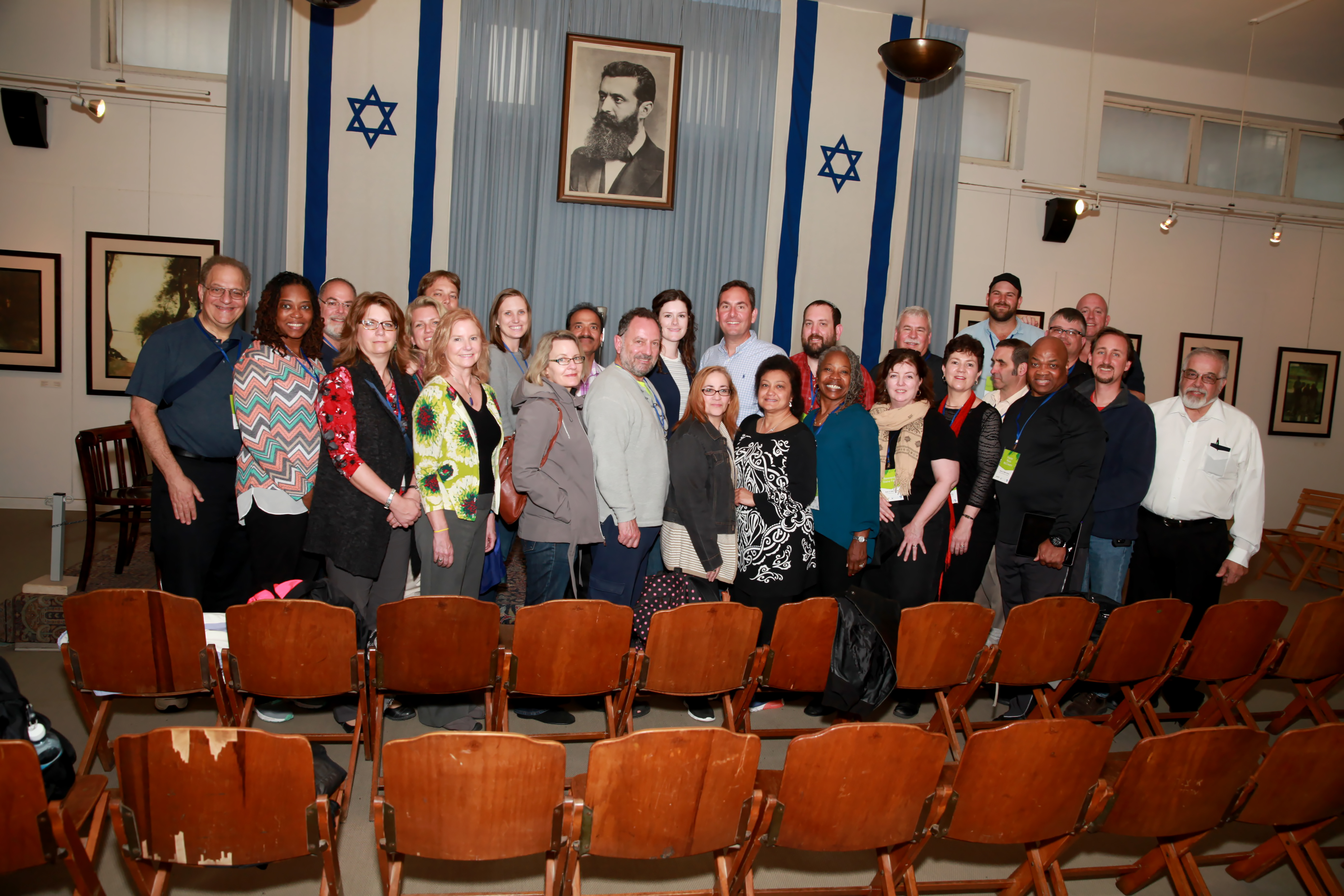 Looking through a different lens

The Rev. Tony Cinardo, chaplain and director of pastoral care at Monmouth Medical Center in Long Branch, said visiting Israel is the “very best investment you will ever make in your ministry. The mission provided a chance to see modern Israel through a different lens. The hospital where I work has a large Jewish community. I hold a multi-faith clergy appreciation event, and I hope the connections I made on this trip will provide a chance for the Jewish community to get to know me better.”

For Cinardo, experiencing Israel first-hand has made him question the media coverage of the region. “Why is there little to no effort in the media to highlight the peace efforts such as the programs we visited? It makes me wonder if the people who make the news and hold international peace summits really want peace at all.”

For Rabbi Bryan Kinzbrunner of Highland Park, chaplain at the Oscar and Ella Wilf Campus for Senior Living in Somerset, the interfaith mission provided a unique new look at Israel.  As a result of the trip, Kinzbrunner has joined the interfaith clergy group of Edison/Metuchen.

“To hear a Christian hymn while overlooking sites in Jerusalem that are holy to Jews, Muslims, and Christians and to walk to the Western Wall on Shabbat morning with pastors for the morning service at sunrise — each of us coming for our own spiritual and ritual fulfillment — were experiences I could never have dreamed of sharing,” Kinzbrunner said.

Although he has been to Israel about two dozen times, Rabbi Don Weber of Temple Rodeph Torah in Marlboro said this trip was perhaps the most inspirational.

“Going up the Mount of Olives and hearing the pastors sing the Lord’s Prayer next to the place they believe it was first said was simply beautiful,” he said.

“The connections we made were wonderful,” said Weber. “I don’t think I have ever heard so many thank yous in my life — to the group leaders, to each of the participants, and to God.”

For the Rev. Ophelia Laughlin of Rumson’s St. George's by the River, the mission proved to be “much more complex and much more hopeful than originally thought,” she said. "There was so much gained by visiting the various programs. It was exhausting, transformative and exceptional.”

Being on the mission fulfilled for the Rev. Vivian Wright, assistant pastor at Hope Church in Bound Brook, one of her most meaningful “bucket list” goals.

“To actually stand in the places that you preach and teach about all the time presented a series of ‘aha’ moments,” she said. “I really felt the presence of God.”

The Rev. Mark McCreary of Second Baptist Church in Metuchen was drawn to the mission “for the personal exposure to the land of the Bible; to be able to see first-hand the places that I’ve studied for years like the Mount of Olives, the Garden of Gethsemane and the tomb at the Church of the Holy Sepulchre. When I walked into the empty tomb it literally buckled my knees.”

For more information about the Jewish Federation in the Heart of New Jersey’s community outreach, or the interfaith clergy mission to Israel, contact Keith Krivitzky at 732.588.1800 or KeithK@jewishheartnj.org

Link to story at MyCentralJersey
Link to In the News Archive