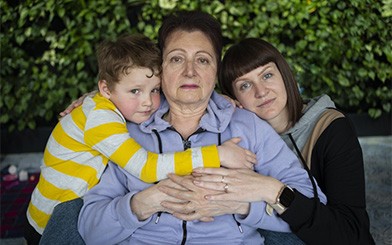 With 119 days of war in Ukraine, millions of Ukrainians, including an estimated 50,000 Jews, have fled. Many Jews have gone to Israel, most have decided to remain in Europe, and significant numbers are still in Ukraine.

As always, Jewish Federations are central to the North American Jewish response to an international emergency. Acting as a collective, and through long-standing relationships with partner organizations, Jewish Federations are bringing a decades-long presence on the ground in Ukraine and surrounding countries to convene and encourage cooperation between organizations to provide direct assistance to those in danger.

Jewish Federations and our partners continue to raise money and work together to ensure that urgent relief reaches the neediest.

Jewish Federations across North America have collectively raised more than $64.3 million since the fighting began – approximately two-thirds of the $99 million for needs projected through the end of December 2022.

Distribution of funds (a) have focused on and (b) are expected to focus on the following needs:

In the first three months of the war, Federations allocated approximately $48 million in aid for such needs as:

Helping those caught in the fighting

Providing support to tens of thousands of homebound elderly, many of whom are Holocaust survivors, and the disabled to survive, through the provision of humanitarian supplies, medicines, and regular contact. We are also helping the Ukrainian health system and NGOs deal with a population suffering from severe psychological trauma.

Assisting those seeking to flee

Safely transporting Ukrainian Jews from the war zone has become a major challenge, with humanitarian corridors open only for short periods, public transport limited and gas not always available. We are supporting hotlines to coordinate the movement of refugees, bus services, temporary housing, and food and other emergency supplies for the harrowing journey.

Aid for refugees in neighboring countries

Many thousands of Jewish refugees and millions of non-Jews have fled Ukraine for Poland, Slovakia, Hungary, Romania and Moldova. We are supporting temporary housing, humanitarian support, psychological support and respite activities for Jewish refugees, many choosing to remain in the region in the hope of returning home or being reunited with draft age male relatives unable to leave.

The Jewish Agency for Israel has received almost 10,000 Aliyah applications, with the numbers expected to continue rising. Jewish Federations of North America umbrella organization (JFNA) is supporting efforts bringing to Israel those who eligible for Aliyah as quickly as possible and facilitate effective absorption in Israel.

The American Jewish Joint Distribution Committee (JDC) reports, since the crisis began, they have:

The Jewish Agency for Israel reports, since the crisis began, they have:

As schools and Hillels closed, the role of Educational Institutions quickly changed to assisting students, staff, and their families evacuate or providing shelter.

2. Aliyah and the Welcoming of Refugees to Israel

As the outflow of refugees has slowed, we expect to also (3) address needs of Jews in other countries of the Former Soviet Union affected by the conflict, and (4) later, rebuild Jewish life in Ukraine.

"I'd like to thank the members of our community who have stepped up to support vulnerable people, near and far -- not only with emergency donations but most importantly through Annual Campaign contributions," said Susan Antman, Executive Director of Jewish Federation in the Heart of NJ. "Due to Federation's Annual Campaign, our partners and infrastructure were in place to act immediately and will continue to serve as the foundation for aid as the needs evolve. Your dedication to those in need both in our community and around the world changes lives and we thank you for it."

Donate to Jewish Federation in the Heart of New Jersey's Annual Campaign at jewishheartnj.org/donate.

The Jewish Agency for Israel provides Ukrainian Jews with food, supplies, transport, and shelter to facilitate their safe passage by land out of Ukraine. It enables the rapid approval of Aliyah for those who choose to move to Israel and provides temporary housing until they are approved, at which point they are flown to Israel. The Jewish Agency hotline receives calls from Jews in the region and their family in Israel. The Jewish Agency is also helping increase security for dozens of local Jewish organizations in Ukraine and caring for Ukrainian young adults currently in Israel on programs.

Chabad, through the extensive Chabad network of Shluchim (rabbis and spouses of rabbis) in the Federation of Jewish Communities of the CIS-FSU, provides food, medicine, and safe shelter to Jews remaining in Ukraine. Chabad also facilitates the safe passage of those who choose to leave their homes and arranges housing for them upon arrival in the neighboring countries.

Jewish Community Vienna has set up an initial refugee reception center to provide temporary housing and other services. It is also providing longer term housing, food, financial assistance, and medical and psychological care for Jewish refugees.

Project Kesher leverages its decades of work in Ukraine to facilitate the evacuation of women and children and help them receive support in host communities. Project Kesher alumnae provide country-appropriate advice and micro-grants to the most vulnerable.

World ORT assists refugees through ORT schools in surrounding countries and supports the staff, students, and families of six Ukrainian schools who have remained in Ukraine, providing cash, food and medicines for those sheltering in place.

Hillel International hosts and provides support to Ukrainian Hillel students and other Jewish refugees in Hillel Centers in surrounding countries.

Shma Yisrael arranges transportation and safe housing away from the conflict for students of the three Ukrainian schools in the Shma Yisrael school system.

The American Jewish Joint Distribution Committee (JDC) emergency response efforts include transport of humanitarian aid, food, and medication, provision of telemedicine devices to the Israeli Field Hospital in Mostyska, Ukraine, and training of local healthcare practitioners in their use, and, in partnership with the Israeli volunteer organization NATAN, deployment of a team of Israeli medical professionals to manage a clinic near the Ukrainian border in Poland.

The Israel Trauma Coalition (ITC) uses its extensive global experience to train Jewish and non-Jewish personnel in Ukraine and the surrounding countries on how to assist those affected by the conflict, many of whom are suffering from severe psychological trauma. ITC is also providing direct care to Ukrainian olim and the families of Ukrainians living in Israel.

Hadassah Medical Organization (HMO) is providing medical equipment to the Ukraine health system and training and medical delegations to the Medical University of Lublin in dealing with mass casualties and trauma and providing medical services to refugees in humanitarian aid centers.

HIAS works through its partner organization in Ukraine, Right to Protect, with a focus on serving the most vulnerable Ukrainian refugees. It is providing training and technical support and cash assistance for accommodation, transportation, and the purchase of basic needs.  HIAS is also assisting Ukrainians in the United States.

The Jewish Agency for Israel enables the rapid approval of Aliyah for those who choose to move to Israel and provides temporary housing until they receive approvals, at which point they are flown to Israel.

Nefesh B’Nefesh provides a one-stop-shop facility on its campus to assist the government in processing Aliyah-eligible Ukrainians, supports Ukrainian Lone Soldiers in Israel, and assists their families who arrive in Israel.

Emergency Volunteer Project uses its fleet of mobile kitchens to deliver hot meals to Ukrainian refugees who are being hosted by Israeli families. Meals are prepared and delivered by Israeli and American volunteers.