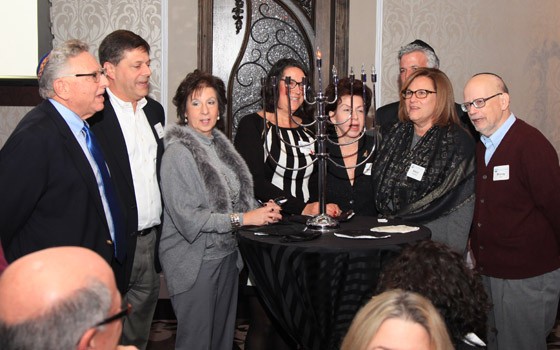 Nearly one year after the Monmouth and Greater Middlesex Federations merged to become the Jewish Federation in the Heart of New Jersey, supporters and partners gathered for its first annual meeting, recognizing the organization's accomplishments in 2015, looking at smart ways to address unmet needs in 2016, installing the incoming board of trustees, and honoring leaders who helped make get the merger off to a successful start – as well as celebrating our first Chanukah together.

About 150 people attended the first annual meeting Dec. 9 at the Grand Marquis in Old Bridge. Guests heard from community members and partner representatives how the Federation’s support has made an impact in their lives and the lives of others.

President Mitch Frumkin opened with brief remarks, saying, “Together, we have engaged thousands of Jews in social, educational, and philanthropic ways, who were not previously connected to the Federation or the community.” He added, “The merger was not designed to produce a financial benefit in the short term; nevertheless, our $4.5 million entity freed up $150,000 by combining functions. Furthermore, we have evolved our role as a convener of partnerships and our focus on leveraging resources to create smarter impact where needed most.”

Elizabeth Binstein, a student at Rutgers University studying social work, lauded the Federation for supporting programs “that have instilled a love of Jewish values and inspired me to dedicate my life and career to helping others.” These include the Federation’s JTEAM Teen Philanthropy, Rutgers Hillel, Rutgers Jewish Xperience, and Birthright Israel.

Sheri Guttman, a wife , mother, and business owner, praised the Federation-supported PJ Library program, which delivers a Jewish-themed book or game each month to her young daughters. She said, “Our family is proof that PJ Library inspires young people to embrace their Jewish identify. But PJ does more. Since the Federation’s merger, it’s taken PJ beyond the home.” She went on to explain the Federation held 20 PJ events this year as part of its Playdates In the Park and Sweet Summer Series. The events brought together Jewish families of all kinds to make the community vibrant and welcoming for everyone.

Roseanne Koenigson spoke of her experiences as chair of the Federation-supported Peace of Mind program, which brought 17 Israeli combat veterans to our area for a week of respite and trauma-related group therapy. The visit was sponsored by synagogues of all denominations. Plans are under way to bring in another contingent of IDF vets next fall and the Federation is now funding intensive therapy workshops for over 20 army units back at home in Israel. “The Peace of Mind program strengthens bonds between Israelis and Americans and helps IDF vets live productive and healthy lives,” Rosanne said. “The Jewish communities in Israel and the heart of New Jersey are both fortunate to have Peace of Mind.”

After the impact speakers, Federation Executive Committee member and co-chair of the Community Impact committee, Adrienne Ross, presented the impact committee’s recommendations for local grants to care for the vulnerable in 2016.

She explained 35 percent of Federation funds are allocated toward programs for the vulnerable, including the delivery of 43,000 kosher meals-on-wheels throughout Greater Middlesex and Monmouth counties each year. She spoke to the profound level of meaning she gets from her work on behalf of the Jewish Federation and the Jewish community.

Following Adrienne was Michael Wasserman, chair of the Federation’s new Life and Legacy Program. He announced the names of 10 local institutions who will take part in the program, which helps Jewish organizations approach their donors for legacy gifts or bequests.

A program of the Jewish Federation in the Heart of New Jersey in partnership with the Massachusetts-based Harold Grinspoon Foundation, the Life and Legacy program provides training, mentorship, and marketing as well as incentive grants to each partner organization that meets its yearly goal.

“Any community organization that has not been selected is welcome to reach out to the Federation regarding training and materials to enhance their legacy giving efforts,” Wasserman added, “The Federation is so pleased to bring this extraordinary opportunity to this community.”

Also at the meeting, the Federation honored board members who oversaw the merger planning, having those in attendance lead the menorah lighting. Mitch Frumkin said, “We would not be where we are today without the efforts, insights, and talents of these dedicated leaders.”