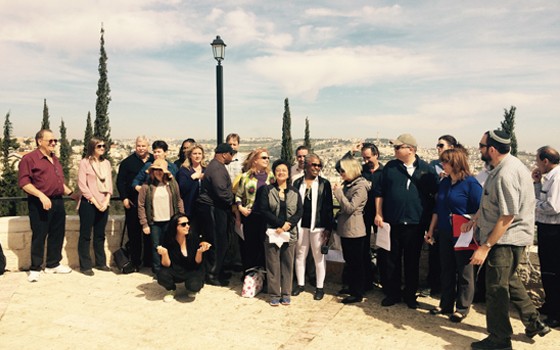 I want to share with you some more private, and perhaps less politically correct, thoughts on the Interfaith Clergy Journey we are undertaking right now.

First and foremost, though – though it has only been a day on the ground so far, the experience has been amazing and eye-opening.  I am sure there will be more to share as we progress, but I did want to share some initial reactions with you before Shabbat.

We have 27 people on our trip, including close to 25 clergy – almost all non-Jewish.

I am not quite sure how to say this…so I may not get it right the first time.  But, they are not interested in the same things as us.  Or rather, their perspective and the interests and “baggage” (or maybe lack thereof) they bring to the table is totally different.

When they look out at Jerusalem, they don’t see “eternal capital of the Jewish people” or the place we have longed for/prayed towards for millennia.  In terms of Israel, they don’t see the modern day culmination of the enlightenment or a political movement, or the rebirth of a nation – though they may see some sort of payback for the Holocaust.  They are very sympathetic to “justice” and the underdog, and give a lot more credence to sources and viewpoints that we probably tend to ignore or are not aware of.

Bottom line – their primary concern is not us, the Jews, and our victimized and paranoid points of view (not a value judgment there at all…and just because you are paranoid doesn’t mean they aren’t out to get you).  We tend to project our belief system outward onto others.  They have a completely different belief system; while we see one map of Jewish survival and achievement, they see a map of heavenly Jerusalem (or want to) and imagine the paths and pitfalls of Jesus, with Jews as something of a background plot element.  Modern-day Israel, to a degree, is just background noise.

I say this because our approach to advocacy…and arguing for rights and justifications and double-standards – it doesn’t really work with this audience.  Or many of them.

But, this trip that we have arranged, which focuses on interfaith bridge-building and exploration, I think, will have a profound impact.  Even from our first day discussions and wrap up (and prior discussions), the primary emotion on the part of participants is…gratitude.  That, plus an open heart and mind (also present in large quantities), will make for good allies or sympathetic questioners.

In some ways, I think this will be more impactful than Birthright Israel in a number of ways.  With this group of clergy, there is no expectation; they don’t automatically assume Israel – or the trip – is a “birthright”.  Which means that we can open eyes and affect thinking in perhaps a more powerful way, and that this idea of gratitude for this journey will have a longer lasting and deeper effect.

As we struggle with trying to engage members of our own Jewish community, and to foster positive ties and understanding of Israel – no longer a given – building these bridges to and educating our non-Jewish brethren is critical.  Thanks for helping make this possible.

Best for a Shabbat Shalom from Jerusalem.