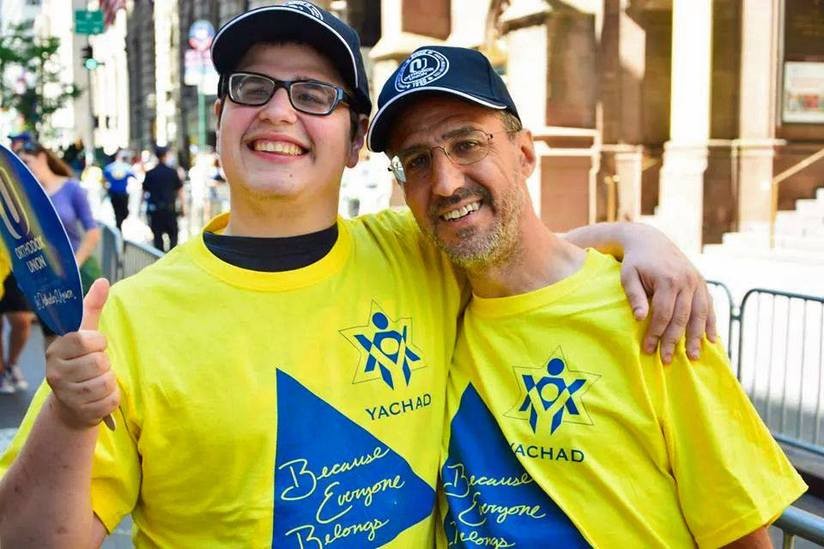 A fitting story for the day of the Boston Marathon. Dr. Steven Reich is a long-time supporter and friend of the Jewish Federation.

An air conditioning repairman from New Jersey remembers the accident that changed his life and offers details to his road to recovery.

The thwack came out of nowhere.

Zev Rosenberg – a heating and air conditioning repairman installing a hot water tank in a New Jersey home – was crawling toward the low doorway to exit a basement when he knocked his head. "I collapsed right there on the job," he told From The Grapevine.

The date was May 1, 2013. It was just four days before the New Jersey Marathon, a race Rosenberg had been preparing to run. Fate had other plans.

The accident left him paralyzed from the neck down, but Rosenberg couldn't comprehend his new reality. "My first thought was, I don't think I'm going to recover from this in time for the marathon."

At the hospital, spinal cord experts Dr. Haim Blecher and Dr. Steven Reich and swooped in to help. Believe it or not, Reich thought, Rosenberg was lucky. His spine had been seriously injured, but it was not severed – a difference, it turns out, that was monumental. "His particular injury did portend a better prognosis for ultimately being able to be up and walking," Reich told From The Grapevine.

Rosenberg underwent emergency surgery, and Blecher and Reich quickly went to work. "We ended up putting in a lot of hardware," Reich explains, referring to the screws and bolts now taking up residence in his patient's spine.

A post-operative x-ray shows the screws and other hardware put into Rosenberg's neck and spine. (Photo: Dr. Steven M. Reich)

After the surgery, Rosenberg was transferred to the Kessler Institute, a rehab facility in New Jersey. That's where his journey back to walking – and eventually running – began. But those first few steps were rough. "Between the numbness and the lack of balance, it's like being drunk without the emotion," Rosenberg says.

Reich recalls an early conversation he had with Rosenberg. "He told me at the beginning that he wanted to get back to running. I told him that it would be my greatest pleasure to see him run a marathon."

Six months later, defying all odds, Rosenberg was well enough to walk a half marathon in Philadelphia. It was a family affair – three of his children and his sister joined him in participating. He even ran the final mile. "I thought, if I could run a mile, I could run 26.2 miles."

He had his chance to prove himself in the spring of 2014 when he completed a New Jersey marathon, the race that he missed the week of his accident a year earlier. Rosenberg calls it his "arch-nemesis."

Zev Rosenberg (second from left) with his family after the half marathon in Philadelphia. (Photo: Courtesy Rosenberg family)

And then, in March 2015, Rosenberg flew to Israel to participate in the Jerusalem marathon, a race that winds its way through the Israeli metropolis. He used the opportunity to raise money for Yachad, a charity that helps families with disabled relatives. "It was a dream come true. I was practically in tears," he says, recalling the moment he crossed the finish line.

"It's an amazing determination on his part to see that clear vision and really for him to have achieved that is amazing," Dr. Reich says. Rosenberg now discusses his journey back to health with other people who are injured and tries to give those in need some emotional support. "He's really an inspiration," Reich adds. It's been nearly two years since that fateful accident in a basement, and Rosenberg hasn't fully recovered. The injury left him with some mobility issues, and his arms are not nearly as strong as they once were. Lifting heavy objects and tasks requiring some dexterity are still difficult. But he can once again run marathons – indeed, he plans on taking part in a marathon in D.C. this October – and that brings him immense joy. "When I had my injury, I thought, that part of my life is over. And it was a huge part of the enjoyment that I got out of life," he says. "It's great to be running again. And it was great to achieve that goal." Dr. Reich is a long-time supporter of the Jewish Federation.