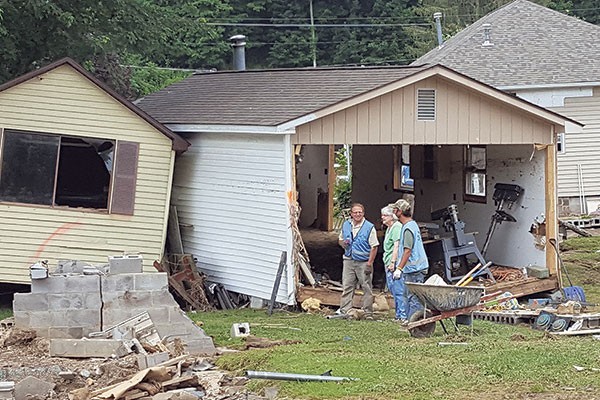 Rabbi Shira Stern of Marlboro sat on the steps of the Saint Thomas Episcopal Church in flood-devastated White Sulphur Springs, W.Va., on June 30 and reflected on the first four days of her week’s service heading a cohort of five chaplains engaged in disaster relief with the Red Cross.

A week earlier, severe thunderstorms had ravaged much of the state, bringing eight to 10 inches of rain and deadly flooding in many areas.

“I am at Ground Zero,” she told NJ Jewish News. In a state suffering from severe poverty, the area of White Sulphur Springs and The Greenbrier, a nearby upscale resort, had been — prior to the flood — among the most affluent in West Virginia. The resort sustained massive damage but its buildings were able to serve as temporary shelter for displaced area residents; the Episcopal church is a headquarters for local relief efforts.

“What we are looking at is hardly a resort,” she said. “We are looking at people who have lost everything. The town is totally devastated. There are people who climbed to the roofs of their homes to get rescued and people who were brought to safety by huge National Guard trucks which managed to drive through the water.

“But there were three streets where people truly did not have time to get out of their homes. That is where a lot of deaths were.”

At least 26 individuals are reported to have died in West Virginia as a result of the flooding; more than 20,000 people in the state were affected by the storm. On June 25, President Barack Obama declared the state a major disaster area and ordered federal aid to supplement state and local recovery efforts.

Stern heads a team of five Red Cross chaplains, and although she is the only one who is Jewish, she and her colleagues feel a special bond, she said, as they go about their work of providing physical and spiritual assistance to flood victims.

They are working alongside members of Keller Williams Cares, a volunteer disaster relief group from Austin, Texas. “These people are angels,” Stern said.

When the flooding first hit, the KWC workers trucked in supplies, then set about clearing out seven or eight inches of mud and debris from severely damaged houses. They are now organizing drives for food, clothes, and money for those whose lives have been devastated.

“We walk up and down the streets which have been affected,” Stern told NJJN. “There are people who are trying to salvage what little they have or they are staring at empty space and trying to decide what to do, or they are putting up memorials. Several people have been washed away and are still missing or presumed dead — but we don’t know.”

Part of her mission, she said, is to be a good listener to people whose lives have been forever damaged.

“We have been hearing stories that are extraordinary — stories of both salvation and hell, and sometimes they come from the same person.”

One was told by a woman who was on her roof when she saw lightning.

“She realized it was more dangerous to be on her roof than inside her home,” said Stern. “She was rescued by the good graces of an extraordinary neighbor who walked across water that was at least a foot high to rescue her and several others.

“We listened to these narratives, and when you honor the narratives they become holy words,” Stern said.

What she has witnessed, she said, “is heart-wrenching. Most of what I am feeling is that some people are left with nothing but stories, and I have the great honor of being the receptacle where those stories are placed. They are stories of people not being able to save their family members and not knowing what happened to family members who were swept away or whose houses were demolished and will not be rebuilt.”

She called her work with the Red Cross “an extraordinary honor and responsibility.”

Stern’s first mission of disaster relief duty as a Red Cross chaplain came after the 9/11 terrorist attacks. She was stationed at Liberty State Park in Jersey City, which was converted into a family assistance center where multiple agencies provided services ranging from child care and medical needs to facilitating insurance claims and death benefits. Stern and other chaplains ferried victims’ family members across the Hudson to a platform across the street from where the World Trade Center towers once stood so they could see what amounted to a cemetery.

“We held them and prayed with them,” she said.

Since then she has provided counseling to people affected by such disasters as Superstorm Sandy, at the site of the Boston Marathon bombing, and at a church fire in Bayonne in March.

Stern is a past president of the National Association of Jewish Chaplains and has just retired as primary school educator at Temple Rodeph Torah in Marlboro, where her husband, Rabbi Donald Weber, is the religious leader. A board-certified chaplain, she is the director of the Center for Pastoral Care and Counseling in Marlboro and has served as a hospital, hospice, and long-term-care facility chaplain.

Stern’s writings have been published in The Women’s Torah Commentary, The Women’s Haftarah Commentary, and Jewish Relational Care A-Z: We Are Our Other’s Keeper, and she is the consulting editor of Mishkan Refuah, Where Healing Resides.

Although she is not permitted to solicit funds, Stern said, “If the Jewish community wants to help support the Red Cross, that’s great. There are people coming here from all over to do the work that is needed to be done. They are making a huge difference.”

She was scheduled to return to Marlboro on July 4, and to a new position as rabbinic associate at Rodeph Torah, providing healing services, bereavement counseling, and hospital visits to congregants.

“I don’t come back drained,” she said. “I come back recharged.”