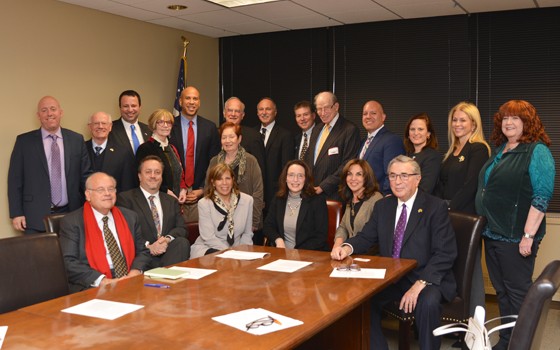 Gordon Haas, State Association president, cited the senator’s record of support for many of the deep interests of the community stating, “time and again Senator Booker has made himself available to listen to the varied voices in our community. His accessibility to us is important and the Jewish community has many questions as to the NJ-Israel relationship, our individual freedoms and, among others, the availability of the resources and support in Washington as to the services and programs we provide to the most vulnerable.”

“The exchange with Senator Booker was very encouraging,” noted Jacob Toporek, executive director of the State Association. “The senator spoke in strong terms about maintaining Israel’s security, preserving the charitable deduction as the resource lifeline for nonprofits such as our federations and their affiliated agencies and protecting Medicaid, which reimburses our institutions $6 billion annually for the services we provide,” Toporek added.

“We also welcomed the senator’s deep concern as to the rise in anti-Semitism and incidents and crimes of hate. Senator Booker acknowledged to our meeting participants that becoming a leading voice in speaking out against intolerance and for civil discourse and mutual respect will be a major focus of his tenure in the Senate,” stated Haas.