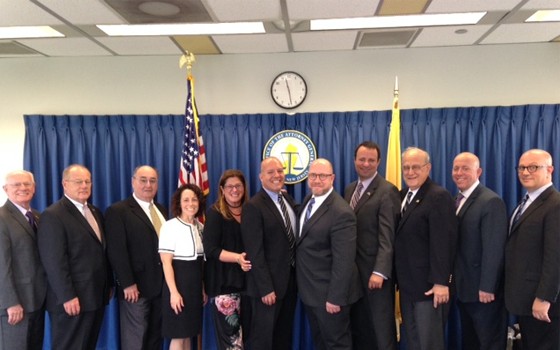 This news was originally released as a press release by the NJ State Associations of Jewish Federations on June 16, 2017.

“We’re deeply appreciative of the collaboration and support we receive from our local and state law enforcement” noted Dov Ben-Shimon, Executive Vice-President/CEO, Jewish Federation of Greater MetroWest. “We are also mindful of the increased need for coordination, dialogue and collaboration and, therefore, I was grateful to meet with General Porrino and key security officers,” emphasized Ben-Shimon.

Jason Shames, CEO, Jewish Federation of Northern, NJ, echoed the sentiment of the federation executives. “The relationship that we have with the Attorney General and NJ law enforcement officials provides great comfort for the Jewish residents of New Jersey that our facilities, infrastructure and lives are all safe and in good hands.  We owe AG Christopher Porrino a great deal of gratitude for the hard work and dedication he has taken to partner with us on these matters.”

The NJ State Police and the NJ Office of Homeland Security and Preparedness (OHSP) were represented at the meeting by State Police Superintendent Rick Fuentes and OHSP Deputy Director, Steve Gutkin.

“There is nothing of greater immediate concern to the state’s Jewish community than the security of our members, institutions and organizations,” stated Gordon Haas, President of the NJ State Association of Jewish Federations.

“Having the opportunity for our Jewish federation executives to voice that concern and receive assurances of support and collaboration with federation from the state’s chief law enforcement officer goes a long way in addressing the apprehension we feel in the wake of recent bomb threats and rise in the incidents of anti-Semitism,” Haas added.

Communication of security and threat bulletins and alerts from state, county and local law enforcement to local Jewish communities a major topic of discussion. The Jewish community’s alarm because of the increase in incidents of anti-Semitism was also raised. “At a time when there are growing concerns about hate, bigotry and antisemitism, the best way to counter this is for leaders, law enforcement, clergy and teachers to come forward and say in unison hate has no home in our communities,” stated Keith Krivitzky, CEO, Jewish Federation in the Heart of New Jersey.

Relationships with the offices of county prosecutors, religious and ethnic community sensitivity training for law enforcement and state budget support for Homeland Security Grants were also part of the agenda of matters brought to the table for discussion by the federation executives.

“It is clear that Attorney General Porrino, Superintendent Fuentes and Deputy Director Gutkin are strongly committed to working with community groups and ensuring that all levels of law enforcement are affirmatively engaged combatting anti-Semitism and all forms of racism throughout the state,” stated Drew Staffenberg, Executive Director, Jewish Federation of Ocean County

“We remain committed to ensuring that nonprofits and religious institutions have the resources they need to worship safely and securely,” said Steven Gutkin, Deputy Director, New Jersey Office of Homeland Security and Preparedness. “We take all threats very seriously and encourage the public to report suspicious activity to us by calling 1-866-4SAFE-NJ or emailing tips@njhomelandsecurity.gov."

“As the government affairs arm of all of the state’s Jewish federations, the NJ State Association of Jewish Federations regards issues concerning the safety and security preparedness of our community as a priority advocacy matter,” noted Jacob Toporek, its Executive Director. “Having access to the state’s top law enforcement team, as provided by the Attorney General and his departmental leadership, is vital in furtherance of our advocacy agenda,” Toporek added.

Pictured in photo, below, from left to right are: 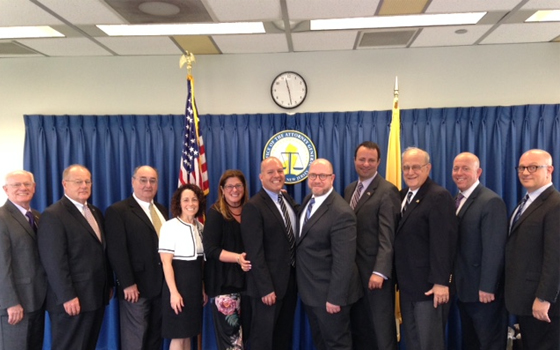