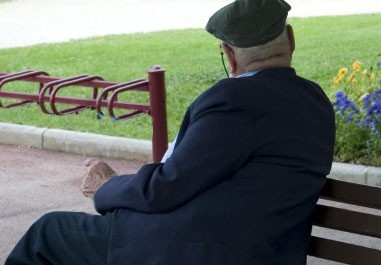 The police knew him as Sam.  When he was found dead, they called the Federation.

Name: Sam no-last-name.  Age: Unknown.  Address: Unknown.  Time of Death: Early A.M. Cause of death: Exposure. That’s what the police report said.  His body was found on a bench in front of Town Hall.

Sam was well known to the cops and local store owners.  Not that he’d ever caused any trouble. He had no police record. The local shop-owners were used to his regular appeals for small jobs, fully aware he’d work for a while and then disappear.  No one knew where he went.  When he reappeared, wearing the same clothes he’d left in, someone would let him wash up, and find him a new set of clothes.

Sam was often seen sitting on the bench in front of the Town Hall.  There was a rumor that the judge in whose memory the bench was dedicated was Sam’s son.  If that was true, Sam never mentioned it.  Not that he mentioned much.  Somehow he’d lost all four front teeth, and talked as little as possible.

The authorities found no next of kin. The coroner found the necklace with the Jewish Star. That’s when the police called the Federation in the Heart of New Jersey. Sam was buried in a plot reserved for Jewish indigents, provided by the Federation, with all the simple dignity afforded every Jew, according to Jewish law and custom.

Cemetery plots cannot be sold by one individual to another, so people who own plots in the area but move away and plan to be buried elsewhere often donate their local plots to the Federation. The Federation then makes these available for people who might otherwise not be able to afford burial in a Jewish cemetery.

In addition, Jewish cemeteries were left behind in New Jersey’s more urban areas when the Jewish populations migrated to suburbs such as East Brunswick and Aberdeen and the urban synagogues closed. In order to assuage concerns that people might not have access to the plots they owned, the Jewish Federation formed a beneficiary agency in 1994, the Greater Middlesex Jewish Cemetery Management Corporation.  That agency now manages, operates, and maintains abandoned Jewish cemeteries in New Jersey. For example, when the cemetery owned by Congregation Beth Israel in Perth Amboy was abandoned, a former congregant left a bequest for the Federation to maintain the cemetery.

Please take a moment to GET IN ON THE ACT:

Donate to the Federation so it can continue to provide services for those in need.

Volunteer to help serve food at one of the local food banks that now dot Monmouth and Monmouth Counties.

Donate any cemetery plots you’re not going to use to the Jewish Federation in the Heart of New Jersey.