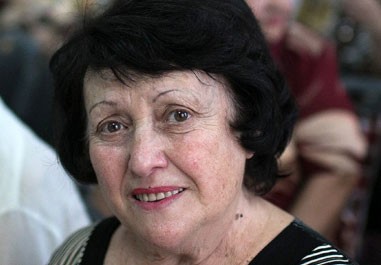 Caught in a war zone, Viktor and Mariya scrounged for food, water, and medicine.  Then they found a Federation-supported haven called a Hesed.

When international conflicts erupt, those who can, leave.   Federation helps them as well as those left behind.

As soon as Ukraine was invaded, Viktor and Mariya’s children fled, begging their parents to join them. But Mariya couldn’t think of living anyplace other than the home on the outskirts of Donetsk in which she’d had grown up, in which she and Viktor had raised their own children.

Mariya suffers from anxiety and diabetes.  Viktor is crippled by arthritis.   Accustomed to hardship and turmoil, they figured they’d manage, no matter who won control of the area. They didn’t count on a vicious trifecta: 40% increase in the price of food, and 100% spike in the cost of medication, and inflation out of control.

Fortunately, a neighbor told them about one of Federation’s international partners, the American Jewish Joint Distribution Committee, also known as JDC or The Joint. Now Viktor and Mariya (not their real names) will tell you that JDC rescued them. Through JDC they’re eligible for money with which they can buy the medications they need.  What’s more, thanks to donations made to the Ukraine Emergency Fund of Jewish Federations throughout North America, including the Jewish Federation in the Heart of New Jersey, Viktor and Mariya can now go to one of the two JDC Heseds in Donetsk every day and enjoy a hot meal in the comfort of friends.

Set up in Jewish neighborhoods, Heseds are a network of centers that offer essential social services and programs, as well as food and companionship, in over 2,800 locations across the Former Soviet Union. For those who can’t leave their homes, or live in more remote areas, JDC arranges for the delivery of boxes of food.  For those who can’t go home, shelters are available.

Viktor and Mariya are among the thousands in conflict areas helped by JDC each month.  Its global network of on-the-ground professionals provides critical social-support services and helps build self-sustaining Jewish communities in more than 70 countries, from Siberia to Argentina. Its disaster response and community development programs provide a lifeline for some of the world’s most vulnerable people.

Following the recent devastating 7.8 earthquake in Nepal, JDC and the Israel Defense Forces cooperated as they have when disasters occurred in the Philippines, Haiti, Sri Lanka, and Japan.  Within hours of each event, field hospitals and temporary shelters have been set up, and food and water delivered and distributed.  Once a situation is stabilized, they work with a network of regionally-based international and local partners to asses, address, and provide aid on an ongoing basis.

The Federation is the one organization that has the infrastructure and interconnections to help people in need wherever they are.  Through the Federation, you have the ability to directly impact the life of someone across the street and across the world, including many whom you will never meet, such as Viktor and Mariya, who are still together, still in their house, and still making their way to the Hesed each day.  Because of Federation and its partners such as JDC, the global Jewish community is thriving together.

Here's How To GET IN ON THE ACT: