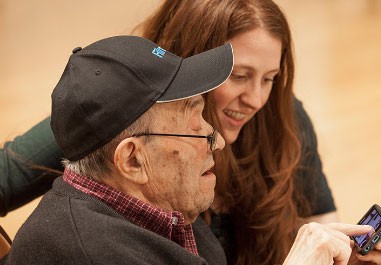 The seniors thought teens wouldn’t listen. The teens though they had nothing to say to the seniors. Misconceptions faded and life-changing connections were made, thanks to a Federation-funded plan.

Aaron Nayer described the teens in his confirmation class at East Brunswick’s Temple B'nai Shalom and the seniors in the congregation’s Senior Service Group as two worlds under one roof. Mr. Nayer knew how much history lived in the seniors’ memories and he wanted to make sure his students had the opportunity to learn from them. More importantly, he hoped the students would drink in the seniors’ passion for being Jewish and for being part of the synagogue of which many were founders.

Nayer developed a questionnaire for the students to follow in order to guide conversation, but quickly learned that just giving them a list of questions didn’t give them the skills for the task. He turned to a Federation-Funded agency, the Jewish Historical Society of Central New Jersey (JHSCJ), for help.

JHS Director Deborah Cohen embraced the project as a way to build on a living history of central New Jersey’s Jewish community, especially since Mr. Nayer planned to capture the interviews on video and compile them in a book. Recognizing that this could have far-reaching value beyond Temple B’nai Shalom, the synagogue and historical society sought and secured funding from the Jewish Federation to expand on the idea. Now, three years later, thanks to continued Federation funding, the program also includes Congregation B’nai Tikvah, East Brunswick Jewish Center, and the Netivot Montessori, linking students and seniors from Conservative, Orthodox, and Reform backgrounds.

Along the way, Mr. Nayer retired and with Bruce Tucker, a teacher at Temple B’nai Shalom, now at the helm, teachers from each location -- few of whom knew one another – conduct regular conference calls organized by the Federation, offering opportunities for these educators to share ideas and a sense of community.

That’s why alarm bells rang when the group’s holiday program was almost derailed.

The East Brunswick Jewish Center teens had invited their senior friends, some of whom didn’t drive, so the teacher had arranged for a bus to pick up the seniors. When the bus company called just the day before, to say the bus wasn’t available, the teacher turned to her Federation connection, looking for help. Sure enough, the teacher was connected to another Federation partner, Wilf Community Connects, whose buses, when not in use on the Oscar and Ella Wilf Campus for Senior Living, are available to transport seniors for free to Jewish community events.

The teens and seniors were able to have their holiday celebration together after all -- thanks to connections from one generation to another, from one Jewish school to another, and from one Federation-supported program to another.

Mr. Nayer is thrilled at how the program has blossomed. But for him, the best possible outcome is the way many of the students have continued speaking with “their” senior friends after the student’s time in the program ended. “I started out wanting to help the seniors transmit some of the history they’ve lived.  It turned out, the program empowered both the senior and the teens to cross the generational divide, so we no longer have two worlds under one roof.”

Donate to the Federation to support programs that connect people throughout the county as well as Federation’s partners.

Bring this program to your synagogue. Contact Laura Safran, lauras@jewishheartnj.org