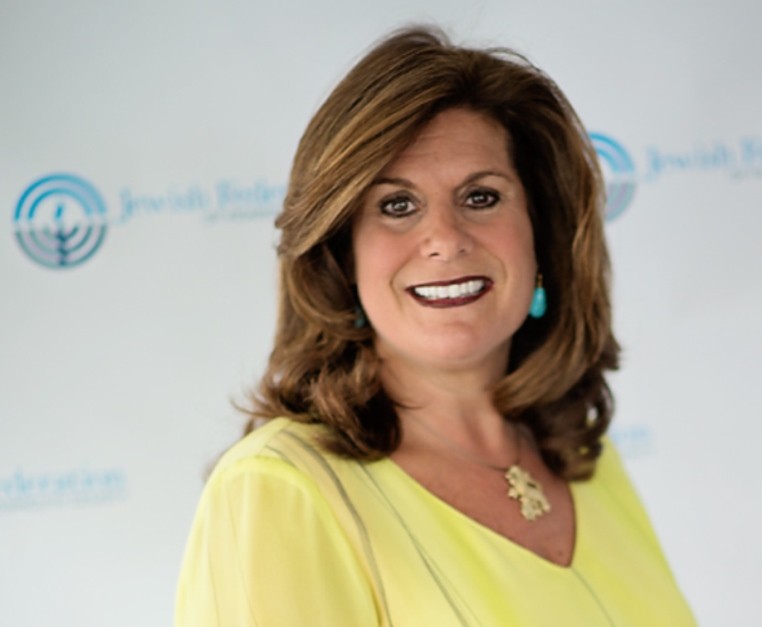 My daughter Samantha “adopted a grandma,” Anna, as part of her Bat Mitzvah project several years ago.  We were introduced to Anna, a Holocaust survivor, through Jewish Family & Children’s Service of Monmouth County.  Since then, Sam and I have been spending time with her together on a regular basis, bringing her food or books or little treats for pampering herself.  We include her in holidays with our whole family, and we just visit.  Last year, Anna invited me to come to her house on my birthday.  She had cooked for a few days a special meal of soup, chopped liver, pot roast, and a birthday cake.  She was only upset that she couldn’t find a candle for my cake.  It made me cry.  I saw how much joy it gave her to have me there on my birthday -- just the two of us in her kitchen. We spent the whole afternoon together and she made me take all the leftovers home. Anna wanted to thank me for all Sam and I had done for her over the years, but I was so touched because, really, Anna had given us so much more than we could ever give her.

This rachmanus – compassion; this joy in giving; this leading by example… where does this come from? As Mindy Wiser-Estin tells it, “I have always just connected to people this way.”

“My parents were involved,” Mindy says. Her father was the Men’s Club president and then temple president; her mom was Sisterhood president and active in Hadassah.

“They always supported Federation and when I was 12, we went on a family mission to Israel.  It made such an impression.”  Mindy has been to Israel eight times; she got engaged there to Dave, now her husband of 23 years; Samantha and Josh, their teenage children, have each been there twice. “We’ve made close friends who live there, so I go back and I give back as much as I can.”

“People in Israel have the same issues we have – there are elderly people who need help with daily living, kids with special needs, and teens who are troubled.  In Israel, a lot of people also suffer long-term effects of terror; immigrants need help integrating into Israeli society; and like here, the needs of Holocaust survivors are increasing as that population becomes more vulnerable.

“When you know people need you,” she says, “it’s impossible not to care.”  [callout]

Before Mindy joined Federation’s board of directors, she rose through the ranks of the local Hadassah chapter, eventually becoming president.  She also served on the board of the JCC for several years.  Reflecting on these and other leadership roles in Jewish life and beyond, Mindy says, “I am fortunate to be able to help.  Hard times can affect anyone anytime. I believe if it were ever my family and me, the community would be there for us.”

Mindy became a Lion of Judah several years ago, which signifies her commitment to give at least $5,000 annually to Jewish Federation’s annual campaign.  “From my earliest days of involvement with Federation, I looked up to Bobbi Krantz,” Mindy explains.  Krantz, a Lion herself, has been a long-time board member and leader within Federation. “When Bobbi presented me with my Lion pin, it meant a lot me.”

Mindy describes finding herself in positions of leadership with Jewish organizations all her life, but sees it as less about ‘position’ and more about people. “More than 15 years ago, my friends were involved with Federation’s Young Adult Division, and they got me involved.  Our kids went to the JCC preschool together, so I got involved in the JCC.

Asked what has made her such a successful leader in each of these roles, Mindy thought, “When I was a kid I did sports, and I had friends who were jocks, but I didn’t just hang out with the jocks. I was in the choir, and I had a lot of artsy friends, but I didn’t just hang out with them. I have always had friends from a lot of different groups.  I like it that way.  We talk about what’s new, and I tell them what I’m involved in.  Of course everyone’s invited to join in, so I wind up bringing a lot of people along to help.”  She paused and reflected, “It’s just relationships.  It’s all about people.”