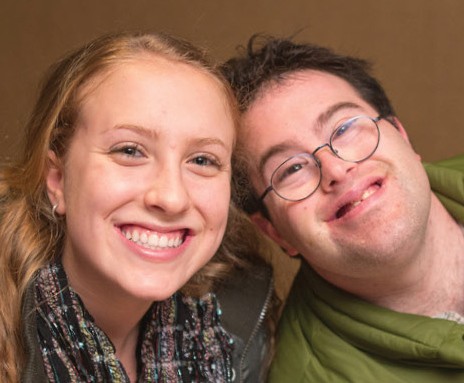 Jesse had no friends until a Federation-funded program for people with special needs changed his world.

When Jesse was diagnosed with Autism, his parents felt heartbroken and alone.  The youngest of three, Jesse saw his siblings have fun with friends. When he asked why his brother and sister had friends and he didn’t, his parents had no answer. Then they learned about Yachad, and the program supported by the Jewish Federation in the Heart of New Jersey changed the world for all of them.

The Hebrew word for “together,” Yachad, connects individuals with special needs to each other and to mainstream peers for socialization and shared experiences. Programs such as apple picking and holiday parties run by trained volunteers give individuals with developmental challenges the opportunity to make friends and have fun doing things within a Jewish context. Yachad also offers support groups for parents and for siblings.

“We’d tried mainstreaming him,” Jesse’s mother said, “but he was never happy.  He tried playing with kids in the neighborhood, but they rejected him.  When we first went to Yachad, Jesse might clap along during music or climb on the playground, but he kept to himself. It was a few sessions in, during a craft project, that we first noticed Jesse  sharing art supplies with others.

“We were inspired to watch Jesse get more and more comfortable with each Yachad session – and make friends.  And we saw the same thing happen with each new participant,” Jesse’s mom added. “Realizing you’ll be accepted by the group and learning to trust each other is a major accomplishment for anyone – let alone someone with social challenges.”

The most inspiring moment for Jesse’s mom was the day the group made hamentashen.  The young person next to Jesse was having trouble folding the dough and Jesse patiently showed her how to do it, reassuring her along the way. “Watching Jesse feel confident enough to turn and help someone else was huge! It brought tears to my eyes.”

Jesse’s mom says the volunteers at Yachad are equally inspiring, giving of themselves and helping participants acquire so many therapeutic and social benefits – from making friends and gaining self-confidence to developing small motor skills.

Jesse’s – and Jesse’s family’s – extended family now includes everyone from Yachad. His parents compare notes with other parents, so none of them feels alone. His sister and brother hang out with the siblings of Jesse’s friends.  Jesse’s whole family knows that he – and they – are all happier than ever. What could be more inspiring than that?

The Jewish Federation in the Heart of New Jersey has become a leader in including people with special needs in a vibrant Jewish community. The generosity of donors to the Jewish Federation makes it possible for the Federation to focus on and expand supporting for Yachad and these other programs:

Support programs like these by making a
donation to the Jewish Federation.
Thank you for your generosity!