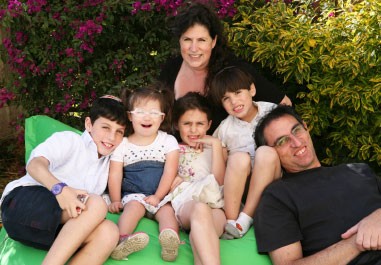 Every parent wants their child to be happy. But not every child has a “happy place.”

Gaby and Stephen knew quickly that there was something different about Hallel. Within hours of her birth she was diagnosed with Down syndrome, a genetic disorder of developmental delay, with varying degrees of severity.  As parents, they now were facing two challenges: making sure their newborn got the care she needed, and setting the stage so their other three children, already primed to love their new sister, could understand the world Hallel would encounter.

Of course there was the third -- one that faces most working parents: appropriate care for after school and during summer and school holidays.

Gaby and Stephen met in Israel after moving there, she from England and he from South Africa. Fully aware that Israel has a limited number of after school and summer programs for children with special needs, they really wanted to find a place for all their children. Fortunately, a friend told Gaby to contact Beth Steinberg who, with her friend Miriam Abraham founded Shutaf, to meet the needs of their own children and others.

Shutaf, Hebrew for partner, is a year-round, inclusive, Jerusalem-based, informal-education program for children and teens with special needs, as well as others who, in Beth’s words, “need a different quality of attention than what is available elsewhere. To Beth, “A diagnosis only describes an issue, not what the child needs to succeed.  That’s what we care about.”

Three of Gaby and Stephen’s four children are now regular Shutaf attendees.  Hallel, now 5, will start once she enters first grade.  Eliav, now 11, started at Shutaf when he was 8.  He’d been to other summer programs, but once he got to Shutaf he decided he wouldn’t to go anywhere else.  When Gabby asked why he explained that, at the other programs, he didn’t think the adults really cared about the kids, and at Shutaf he knew everyone cared about each other.  Beth says that perfectly describes the camp.

As each of Gaby’s children, including Mia, now 9, and Adin, now 7, have entered first grade, they’ve been welcomed into the Shutaf family.  Gaby says, “When your children pop out of bed in the morning with a smile on their faces, eager to go to camp, you know something’s right.  Originally, I planned to send the three oldest to Shutaf because I thought they should be exposed to kids with special needs in order to prepare them for life with their younger sister. Now my kids will go nowhere else but Shutaf!  And they are Gaby’s biggest cheerleaders.  They have really taught us that every child is special and wonderful in their own way.”

Shutaf, one of the programs in Israel that receives a grant from the Jewish Federation in the Heart of New Jersey, is committed to a teaching model that welcomes all children – with and without disabilities – regardless of educational, religious and socioeconomic differences. It offers year-round programs for children and teens including Pesach and August vacation camps; weekly youth groups, and Young Leadership Programs and Life Skills Culinary Workshops for teens.

Fortunately, parents in the Heart of New Jersey have several options for their special children, both during Jewish and school holidays and year-round, thanks to Federation partners such as Yachad, Hand-in-Hand, Friendship Circle, the Special Education Academy of Deal, and Special Strides. That’s in addition to the several programs it supports for challenged or disadvantaged children and teens in Israel. These programs and the people behind them are part of what makes this a community of people thriving together.

Donate to help support even more inclusive programs, locally and in Israel.

Volunteer to work with special needs children and adults at Special Strides, Hand in Hand, or Friendship Circle.

Explore inclusion as a Bar/Bat Mitzvah project, focusing on what it means as well as why it’s a social imperative and important Jewish value for all members of society, with and without special needs.

Read The Beauty of Difference, a blog post by Beth Steinberg.