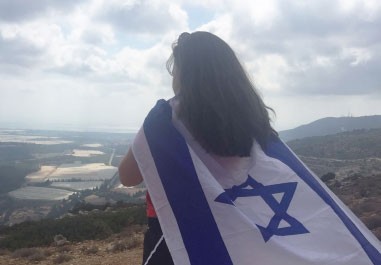 UNIVERSITY OF VIRGINIA, October 23, 2016 – Holocaust imagery of an orange Star of David with the word “Juden” spray painted on student housing.

These are just three of 20+ incidents reported to Amcha, an organization that combats antisemitism at institutions of higher education in America -- THIS OCTOBER, ALONE. A dozen others, also in Oct., opposed Israel’s right to exist – from Tufts University in Boston and George Washington University in D.C., to University of Michigan and Ohio State.

This spring, a San Francisco State University Jewish students event was shut down when protestors stormed the hall, chanting “Get the hell off our campus,” and “Long live the Intifada.”

Newsweek reported in September that Jewish students are shunned from participating in student government, rejected from progressive social justice activities such as anti-rape demonstrations, and ostracized from areas of campus life because of their presumed support for Israel at schools including Stanford, Northwestern, SUNY Albany, and others.

An Amcha study of more than 100 public and private colleges and universities with the largest Jewish undergraduate populations showed a 45 percent spike in anti-Semitism during the first half of 2016 -- with 287 incidents at 64 schools compared to 198 in the same period of 2015.

And yet, more than half of Jews 18-35 believe the destruction of Israel would not be tragic, according to a 2012 report.

It makes one wonder: Will there be a Jewish future?

But parents and grandparents of soon-to-be college students -- even some students, themselves -- have a more immediate concern: how does a Jewish college student deal with this?

Last March, high school junior, Sarah S. of Old Bridge, attended an advocacy training program designed to separate Israel facts from fiction. “To support Israel, you need facts,” she says. “I worry that people listen to biased things, so the more I know, the more I can step up for Israel.”

Step Up for Israel, in fact, is the name of the program that organizers, Temple Beth Ahm and Marlboro Jewish Center enlisted for the training. Step Up for Israel is a partner of the Jewish Federation in the Heart of New Jersey, and the Federation provided an additional grant to make this training available to teens and their parents throughout Monmouth and Greater Middlesex counties.

Sarah dreamed of traveling to Israel. The Federation stepped in again with a grant to help make that dream a reality.

Before her Israel trip, Sarah had assumed responsibility for Israel Awareness with her USY chapter. Toward the end of the year, she considered running to become chapter president the following school year. Her summer experience fanned her passion for Israel and she decided to run for the Israel Awareness role a second time, so she could run more programs, such as one on Israel-related media bias, which she arranged the previous year.

“Seeing Israel first-hand and gaining advocacy education here at home, I now know you can’t believe everything you see in the news or on social media,” Sarah added. “Being in Israel was one of the best experiences of my life; I am planning a gap year there between high school and college.

“When I get to college, I plan to join Hillel and continue my Jewish education. I didn’t grow up with Jewish day school or a lot of emphasis on Israel,” Sarah continued. “But now it’s part of who I am.”

Sarah is one of 395 high school students who took part in Israel advocacy training supported by the Federation in the last year, and one of 49 who received grants for Israel travel.

She is confident in her ability to have a constructive dialogue about Israel. She understands a strong Jewish future must include a strong Jewish homeland. And she is passionate about sharing her love for Israel with others.

But Sarah is one of many thousands of Jewish high school students in the heart of NJ. To secure a strong Jewish future, this community must find a way to help more students process their ideas and feelings about Israel, experience Israel first-hand – before college, and learn to step up for Israel as they see fit.

Every Jewish teen -- your child, grandchild, niece or nephew -- is at risk of being a victim of anti-Semitism or anti-Israel activities on college campuses. Help us prepare them to stand up for themselves and for Israel. No one should have to feel threatened because of who they are.   Please donate today so the Federation can bring more young people Israel advocacy education. They need that from us and we need them to be able advocates. After all, they’re our future.

The Jewish Federation in the Heart of New Jersey supports a wide range of resources to engage and educate the local Jewish community about Israel. Step Up for Israel provides free films, lectures, and more. Click here to learn more.