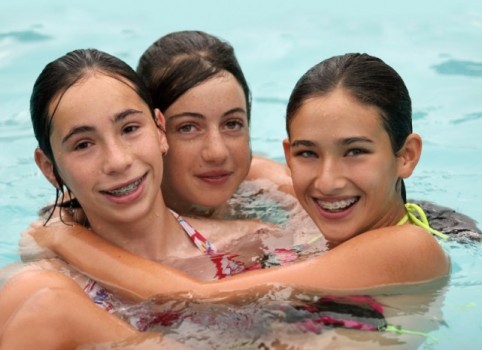 Stacie didn’t want to be Jewish. One magic summer changed her life.

Experiencing Jewish summer camp, with support from the Federation and her synagogue, Stacie felt she belonged for the first time.

Stacie had always felt like an outsider. She lives in an area with no Jewish neighbors and has no Jewish classmates in her middle school class. Her family belongs to a temple but it’s a half hour from home and her parents’ demanding work schedules mean they rarely go. She begrudgingly went to Hebrew school for two years then begged her parents to stop. When they insisted, Stacie lashed out, “Why do we have to be Jewish? I’m the only Jewish kid in my school, and the only kid from my school at Hebrew school!”

That’s when Stacie’s mom made an appointment with their rabbi. When the rabbi suggested Stacie attend Jewish summer camp, her mom said it was beyond their means. Then the rabbi explained the Jewish Federation in the Heart of New Jersey has grant money for summer camp – and the synagogue could help too. Together, they would make camp more affordable. The rabbi then worked with Stacie’s parents to choose a camp they thought perfect for Stacie.

Stacie balked. She wanted to hang out with kids from school and wander around the mall. But her parents prevailed, so in mid-July, hiding her tears and dragging her duffle bag, off Stacie went.

She was stunned how fast she felt at home there.

“A lot of the kids in my bunk were ‘first timers’ too, so I wasn’t alone.  Another girl loved Taylor Swift as much as I do, so we figured out a way to work her moves into marathon sessions of Israeli dancing in the dining hall. After a while, we had the whole camp doing it! I loved color war. They call it Maccabiah, and I hope someday I can really go to the places our teams were named after: Tel Aviv and Haifa. At night, when we joined hands and sang “Rad HaYom” (Day is Done), I felt like we were family.”

Stacie sobbed on the last day of camp and bus ride home.  She didn’t want to leave the place where she’d made so many special friends and finally felt comfortable being Jewish.  Her bunk-mates were sobbing along with her. No one wanted the magical summer to end.  So, although Stacie suspected camp was not within the family budget, she promised herself and her new friends she’d find a way to return.

“I cried when I dropped Stacie off at the bus at the beginning of camp,” her mom recalls, “but I didn’t expect to cry when I picked her up.

“She was taller. Her hair was longer. And her clothes were definitely dirtier (‘This IS a clean shirt, mom!’).”  But there was something else, Stacie’s mom noticed.  Stacie went on about Margo and Ali, and barbecue Tuesdays, and her role in the play, but “it was in the Hebrew words, casually sprinkled through stories... the joy in Stacie’s face as she sang me Am Yisrael Chai – complete with hand gestures… hearing she’d led part of Shabbat services at the lakefront. I’d expected to get back the same kid I sent off to camp. This kid was different. She was happy to be part of a Jewish community.”

“I’m not saying we never had fun as a family at temple during Simchas Torah or at my aunt’s house for Jewish holidays, but camp had given Stacie the chance to experience Judaism in her own way. She owned this!”

Within days of returning, Stacie called her rabbi to thank her for suggesting camp and telling her family about the Federation and temple scholarships. She also sent a thank you note to the Federation. CEO, Keith Krivitzky, responded, saying the generous donations of Federation supporters make camp scholarships possible.

Stacie will return to camp this summer, thanks again to a needs-based scholarship from the Federation and additional support from her temple.

She still doesn’t have Jewish friends at school, but she’s made friends with some of the Hebrew school kids, so she’s more comfortable there. Plus, thanks to camp, she got so good at Israeli dancing that the rabbi added it to the Hebrew school schedule -- with Stacie as one of the leaders. The girls in the class don’t mind when Stacie throws in a couple of T. Swift moves just for laughs.

Applications for needs-based scholarships for summer, 2016, are still being accepted. Contact camp@jewishheartnj.org.

Major national studies show that the impact of Jewish camp is both immediate and enduring —campers return home connected to friends and ideals that often last a lifetime. Children with pivotal Jewish camp experiences are more likely as adults to value their Jewish heritage, support Jewish causes, and take on leadership roles in their communities.* The Jewish Federation in the Heart of New Jersey is proud to provide both needs-based and incentive scholarships for summer camp as well as for summer youth travel to Israel. In the summer of 2015, more than 60 young people are receiving assistance for camp and Israel travel.  Generous contributions from Federation supporters make this possible.

To GET IN ON THE ACT:

2. Attend a Jewish camp fair. Learn what day or overnight camps may be right for your child. [link to B’nai Israel Jan. camp fair and other Laura mentioned recently in Middlesex]

3. Give your little ones joyful Jewish fun, even before they’re ready for camp. Sign up for summer PJ Library events for children 6 months to 7 years.