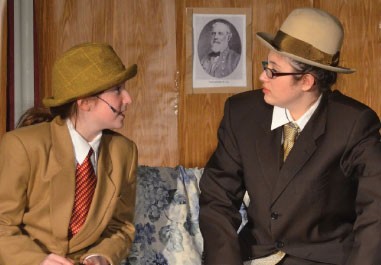 Tali knew the definition of tikkun olam, yet the words only took on meaning when she participated in a Federation-supported Jewish theater program.

4th grader Tali said being in the Studio J Theater Arts production of Only in America, based on the life of political humorist Harry Golden, changed how she thinks about being Jewish.

“In the play, I was a 7 year-old African American named Ruth-Ella. While playing her, I learned that Harry wanted to repair the world around him. He taught Ruth-Ella and other children that even if the bus driver said to sit in the back of the bus, they didn’t have to obey the bus driver. That’s one of the ways Harry played a part in helping to end segregation. His small part helped a lot of people.”

The 10-year-old went on, “My experience at Studio J Theater Arts changed the way I think about my life as a Jewish person and how each of us, doing things in our own lives, can make a big difference. Plus, it was a wonderful combination of Jewish education and acting.”

Tali is one of the 7 to 17 year-olds who participated in the inaugural production of Studio J Theater, a non-profit theater group supported by a grant from The Jewish Federation in the Heart of New Jersey.

In this, its inaugural year, the small acting company has already had a huge impact on the lives of its young actors.  The brainchild of Stacy Greenblatt, Studio J Theater Arts aims to “provide creative and educational space in which students explore their Jewish heritage while honing their acting skills.”

Golden, a civil rights activist, founded, wrote, edited and published The Carolina Israelite in Charlotte, N.C. from 1944 to 1968.  His publication was humorous and provocative, and was read by most of the important leaders in the U.S. of his day. During rehearsals, Stacy led discussions that helped the young actors understand that Golden’s life was informed by core Jewish values such as tikkun olam, repairing the world. According to the budding thespians, the lessons took root.

Rachel, a 5th grader in an East Brunswick middle school, joined the class for the acting experience, and was surprised by how much else she learned. “For me this was not only an amazing acting experience, but it also taught me more about who I am as a Jewish person.”

Jewish arts education in the Heart of New Jersey is not limited to children’s theater productions.  The Axelrod Israeli Film Festival, July 10 through 19, is bringing extraordinary films to the Axelrod Performing Arts Center, the Jewish Heritage Museum in Freehold, and the Monroe Senior Center in Monroe Township.  In August, the Axelrod will also be home to “Damascus Square,” a play loosely based on the life of an Israeli spy. In early fall, the 16th Annual Rutgers Jewish Film Festival is set for October 28 - November 8 at the Bildner Center for the Study of Jewish Life at Rutgers School of Arts and Sciences.  All are supported by the Jewish Federation.

Whether in film or on stage, educational Jewish arts experiences are life-enhancing, and part of the reason people in the Heart of New Jersey are thriving together.

How you can GET IN ON THE ACT:

See any or all of the Jewish Films available, and check the community calendar for upcoming performances in the area.

Read “Only in America,” by Harry Golden.

Donate to the Federation, so Jewish arts continue to thrive in this community.