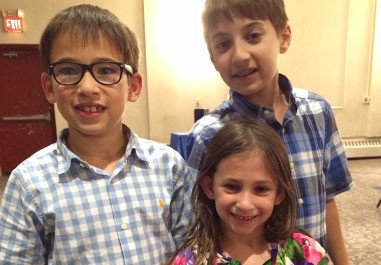 A great new job, an uprooted family, and three young children equaled one challenged family.  Then mom found a Federation-supported school that fit her family’s needs.

Debra Fisher says “We landed here from London six years ago because my husband, Daniel, was offered a terrific opportunity.  We all looked forward to the adventure, but I worried whether I’d find good schools for my children.”

She explained, “Of paramount importance was a Jewish school, one that was nurturing, supportive, in which they’d make good friends, get a strong secular education and in which they’d really learn Hebrew – the whole language, not just the aleph bet. Their grandparents live in Israel, so we wanted our children to learn to speak, read, and write in Hebrew.”

Debra, a marketing professional, began researching other options and says when she walked into the Solomon Schechter Day School of Marlboro (SSDS) she was sure it was perfect for her family. Normally a fast talker, the words fly twice as fast when she talks about the difference SSDS has made in the lives of her family.

“The results were instant!  My children blossomed from the minute they started there.”  She says the experience offered at SSDS is unique. “Each of my children is challenged at the school, in the best possible way.  Within moments, each one of my children had connected with their teachers.  They’ve all really learned to love learning and been encouraged to be self-motivating. And along with that, they become community spirited, and understand the importance of giving back.””

Matty, who just completed 7th grade, loves labs and science.  He’s also enjoyed being part of the school plays.  He wants to be a film director and says, “Since I was in the play the first year and the stage manager the second year, I got some really great experience that I don’t think I would have had someplace else.”

Two years ago, Matty received the school’s community service award in recognition of his volunteering at the Jewish Federation of Greater Middlesex County’s Super Sunday, on the school’s safety patrol, and as a student bus supervisor.

He also really enjoyed going to visit the Sunrise Assisted Living Center, across the street from the school, “Once we went to surprise a 94 year-old who had no family nearby. His face really lit up when we came in.”

Debra says that Joshua, a 4th grader, made much more progress in math than he would have in the United Kingdom.  She also credits the school’s supportive atmosphere with encouraging him, who she described as “a bit shy” to participate in the school’s Mitzvah Day by selling customized rainbow loom bands to people in his neighborhood, and donating the funds to the American Heart Association.

“I never would have had the confidence to do that before,” he said, proudly. “But I did well, and ended up raising a lot of money for the Heart Association.”

First-grader Ella says she loves everything about the school.  And while she and her siblings are looking forward to reuniting with family when they return to England later this summer, they are not happy about leaving their school here.

SSDS is one of the many excellent day schools in the Heart of New Jersey.  One measure of the school’s success is what high schools accept its students.  According to Head of School Yoti Varhi, “We have an outstanding record of acceptance to highly coveted schools.”  This year’s graduates will be going to top private and public schools throughout the state.

Because of the superior education provided by SSDS and the other day schools in the area, Jewish students in the Heart of New Jersey are thriving together.

Make time to GET INTO THE ACT:

Learn more about the benefits of sending a child to a Jewish day school.

Check out JerusalemU, an online resource available for free to everyone in the Heart of New Jersey.

Donate to the Federation to support Jewish education and help build the Jewish future in this community.  Studies such as the one referenced above have shown that Jewish Day School graduates are likely, as adults, to be Jewishly active.