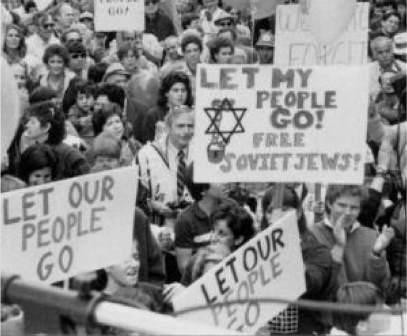 They never felt at home where they were born. Then they came here.

Michail Gorelik says his mother always told him to not to have any illusions about being a Jew in the Soviet Union.  “She said we weren’t really citizens of Russia, and she was right. Even our passports said we were Jews, not Russians.  We were taunted constantly, beginning when we started school. There was a limit on how many of us could get into the good universities. And we knew we’d never be able to leave.”

Michail and his wife, Natalia (not their real names), lived in Minsk, north east of the Chernobyl nuclear power plant.  As a chemical engineer, Natalia understood the impact of the plant’s catastrophic 1986 accident far faster than her accountant husband did. She began searching for well water in which they could cook while he contacted a relative in Moscow and arraigned for weekly shipments of food. Every Friday for the next year, he’d go to the train station and find the one conductor who’d agreed to deliver the package. Natalia says, “I knew it was costing money we really didn’t have, but we had to do what we could to avoid food and water contaminated with radioactivity. Especially for the baby.”

Their lives changed in 1989. That’s when Jews worldwide pressured the Russian government to allow more than a million Jews to emigrate. The Gorelik family didn’t think they would ever realize their dream of coming to the United States because they didn’t have any family here to sponsor them as required by the U.S. government. Little did they know that the doors to their dream had been opened, because Jewish Federations across the U.S. agreed to act as sponsors.

The Federations asked their family service agencies to handle the logistics of the emigration and then turned to synagogues to find apartments and furnish them, to welcome these newcomers as if they were long-lost relatives.  Thousands of families were resettled in the Heart of New Jersey between 1989 and 1993. Among them were Michail, Natalia, and their son, then 4.

When their plane landed at New York’s John F. Kennedy Airport, all Michail knew was that he was supposed to go to New Jersey, which he knew was somewhere near New York. The family was stunned to be met by a delegation from a synagogue in Marlboro, who took them and their sleepy children to their apartment, the first they’d ever had that they didn’t share with other families. The next day they were taken to Jewish Family and Children’s Service in Asbury Park to fill out the necessary paperwork and begin their new lives.

Soon thereafter, Michael went to Wall Street for a practice interview with a brokerage house executive who had allotted 15 minutes for the meeting. After half an hour, Michail was taken to the office of another executive.  Unbeknown to Michail, that second executive was another Russian Jew. Much later that afternoon, Michail called Natalia.  After a quick hello, he said, “I’m in New York City, looking at the Statue of Liberty, and I just got a job.”

In the twenty-five years since that emotional moment, the Goreliks have arranged for all of their extended families to join them.  Their son is married and followed his father into accounting.  Natalia become a retailer, first selling dresses from their living room, and now running two stores. They both will tell anyone who asks, “The Soviet Union was never our home. The United States is our home.”

The Goreliks are among some 700,000 Soviet Jews who came to our shores in a stunning example of the power of collective action. Although they know they are indebted to the synagogue, the Goreliks are sure their lives would be very different had it not been for Jews they will never know, meeting in rooms half a world away, who decided that rescuing Jews in danger was a sacred obligation. Their rescue and resettlement was a the result of an extraordinary collaboration of the Jewish Agency for Israel, the American Jewish Joint Distribution Committee, the State of Israel, the U.S. Government, the national Jewish Federation organization, local Federations and synagogues, and thousands of unsung donors and volunteers. That same cooperation enabled the fabled exodus of Ethiopian Jews just as war was about to close their escape route.

Because of collective action and people who care about the safely and welfare of Jews a world away, the Gorelik family and so many others in the Heart of New Jersey who share their story are thriving together.

You too can get GET IN ON THE ACT:

Donate to Federation to help rescue Jewish in Ukraine and around the world.

Travel to Cuba with Federation, December 16-21, 2015, and meet other Jews who have lived through trying times.

Download Emma Lazarus’ New York, a free mobile walking tour narrated by Julianna Margulies that includes a reading by Meryl Streep of “The New Colossus,” Emma’s famous poem etched on the base of the Statue of Liberty. The tour visits 19 historic sites in lower Manhattan, Greenwich Village, Union Square, Chinatown, Chelsea, midtown, and the East River. The GPS-enabled app is available for iPhone and Android.